President Joe Biden apparently doesn’t have a constant need for caffeine, at least in the form of soda. His predecessor Donald Trump was so fond of his beloved Diet Coke that he had a wooden box with a red button sitting on top of the Resolute Desk in the Oval Office where with one press, a butler immediately delivered him a can of the drink. But new photos from Biden’s desk setup show that the box has been removed.

President Biden has removed the Diet Coke button. When @ShippersUnbound and I interviewed Donald Trump in 2019, we became fascinated by what the little red button did. Eventually Trump pressed it, and a butler swiftly brought in a Diet Coke on a silver platter. It's gone now. pic.twitter.com/rFzhPaHYjk

Chief Political Commentator for the U.K’s Time Radio Tom Newton Dunn pointed it out in a tweet showing photos of Biden at the Resolute Desk on Jan. 20, 2021 compared to Trump’s previous setup. He noted in the caption, “President Biden has removed the Diet Coke button. When @ShippersUnbound and I interviewed Donald Trump in 2019, we became fascinated by what the little red button did. Eventually Trump pressed it, and a butler swiftly brought in a Diet Coke on a silver platter. It’s gone now.” 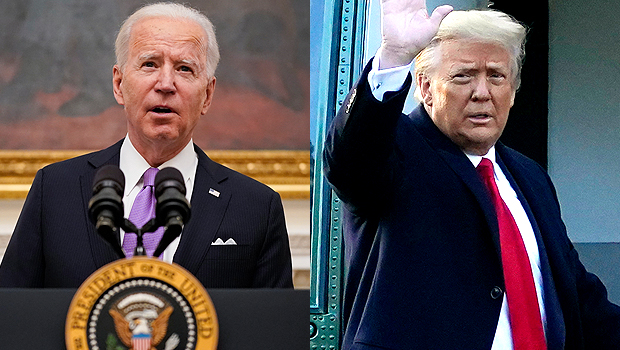 The box with the red button sat to the right of two landline telephones, which are still part of Biden’s desk. After Tom revelation about the “Diet Coke button,” Twitter had a field day with the topic. User @TheMissDucky tweeted, “I’m torn between rolling my eyes at the absurdity of it, but also knowing deep in my soul that I wouldn’t/couldn’t say no to a diet coke button if one was offered to me.” Author Elizabeth May wrote, “So many people are asking if this is a joke, and i regret to inform you all it is not. that button really was to order a diet coke. he reportedly drank 12 cans a day. i hate that i know this,”

Veteran political analyst Jeff Greenfield joked about Trump’s intense love of fast food and soda, tweeting, “TRUMP’S LETTER TO BIDEN LEFT IN THE DESK: Joe: The Red Button Is for BigMac and Fries; Yellow Button Is For Diet Coke; Blue Button turns on FOX; Black Button Launches the Nukes…or Maybe Black Is for Big Mac and Fries and Red Launches the Nukes.” User @JohnJTerrible responded, “I can see the headlines now: ‘Due to a mix-up involving which red buttons performed which functions, a fleet of 12 KC-135 Air Force Stratotankers dropped 2,400,000 pounds of Diet Coke on North Korea yesterday.”

Trump had a Diet Coke button and when he pressed it, a butler showed up with a Diet Coke.

Maybe they can install that in Mar-A-Lago, but we are classing up the White House.

I would've paid so much money to get to be in the room for the conversation that I imagine went like:

STAFFER: setting up the Oval. Photos are all done. Do you want to keep the Diet Coke button?

BIDEN: the what in god's name button https://t.co/cDhkmqzjr5

Others were more disturbed by Trump’s Diet Coke demand button. User @TheRickyDavila tweeted, “What trashy a**hole sets up a ‘Diet Coke’ button with a Presidential seal on it in the oval office and expected a ‘Diet Coke’ be delivered on a silver platter every time it’s pressed? Biden couldn’t get rid of it fast enough.” @SGarner2603 noted, “I hope the WH career staff, housekeepers, ushers, cooks, etc, will now know that they will be treated with respect again, and no longer have fear of being berated, screamed at, or fired. They have been silent warriors. Nobody bellowing for a diet coke!” Biden is well known for his kindness and respect towards his staff, so there will likely be no bellowing in his White House.