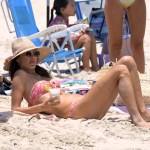 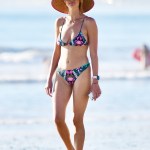 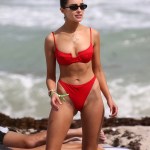 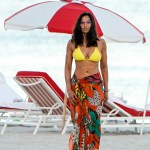 Kelly Rohrbach was a stunning sight to see while enjoying sunny weather and showing off her incredibly toned figure on a Santa Monica beach.

Kelly Rohrbach, 30, is looking amazing these days! The Baywatch star was spotted walking around under the sun while wearing a multi-colored bikini that helped her flaunt her toned body at a beach in Santa Monica, CA on Jan. 17. She also wore a wicker hat and sunglasses that helped keep the rays out of her eyes.

After her stroll, Kelly laid down on a towel in the sand and took in her surroundings. She also put her long blonde locks up into a loose bun to stay cool. It definitely seemed like a relaxing time for the actress!

Before her latest outing, Kelly has wowed people with her talent and gorgeous features on numerous occasions. After taking on the role of C.J. Parker, originally played by Pamela Anderson, in the 2017 film version of Baywatch, she has been in a bigger spotlight and it’s been great to see.

In addition to her professional career, Kelly has made headlines for her personal life. The star started dating Walmart heir billionaire Steuart Walton around 2017 and ended up marrying him in 2019. The two have kept a low-profile when it comes to their romance and were first spotted on a hike in Nov. 2016. A source previously EXCLUSIVELY told us that in the beginning of their relationship, the businessman has even begin giving her “flying lessons on his personal plane.”

Before Steuart, Kelly gained attention for dating various celeb guys, including Leonardo DiCaprio, 46, whom she dated for several months in 2015. She also sparked dating rumors with Aaron Rodgers, 37, when they were seen holding hands in Apr. 2017. A source at the time told us that the football player was trying to keep his dating life with Kelly on the down-low because of a high-profile breakup with Olivia Munn, 40.

“Aaron and Kelly are dating, but they’re downplaying their relationship,” a source told HollywoodLife.com EXCLUSIVELY in May 2017. “Aaron doesn’t want people blaming Kelly for his split with Olivia.”