Nearly everyone is talking about the COVID-19 vaccine this week, and SNL couldn’t resist a sketch spoofing Dr. Anthony Fauci and Dr. Deborah Birx‘s plan! “Wolf Blitzer” opened the faux-CNN segment, hilariously describing himself as an “indoor man with an outdoor name.” He went on to address the vaccine, comparing it to another hot item on the market this Christmas. “It’s just like the PS5 — everyone wants it, no one can get it, and if you’re rich you had it a month ago,” he explained.

Kate McKinnon‘s Dr. Fauci and Heidi Gardner‘s Dr. Birx then took over the news conference to explain their plans for a nationwide rollout. “As you know woos spread droplets,” he said, begging his fans to stop the screaming. “The vaccine is approved and I’m officially joining the Biden administration to continue the fight against coronavirus. We’re doing this vaccine WW2 style — we made England go in first, then we’ll swoop in. Tom Hanks will make 10 movies about it and when it’s all over you can kiss any nurse you want,” she began, noting that “super seniors” with names like “Mildred” will be top priority. 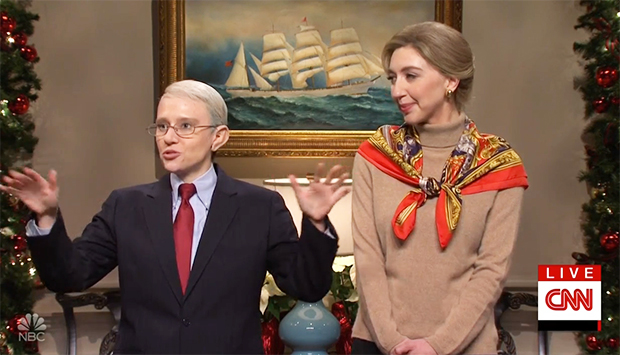 Of course, Fauci has been hailed as an American hero in recent months — which has lead to a quite the fandom! “Stop throwing bras, will ya? This keeps happening — I’m the only people saying facts so some people got a crush on me” he said, hilariously shading Donald Trump. “Any other year I’m a two, this year I’m a 10!” he added next to a seemingly annoyed Dr. Birx — who later noted she was going for a job with the Biden administration.

“We’re going to distribute to states alphabetically starting with LA, New York City…,” Kate’s Fauci went on. “New Orleans we’ll throw ‘em up like Mardi Gras. “The more you show, the more you get…Chicago, will be more of a deep fish,” he added.

Earlier this week, Joe Biden and Kamala Harris were announced as Time‘s ‘Person of the Year.’ “Honored to be named @TIME’s Person of the Year with President-elect @JoeBiden,” the real Kamala wrote on Dec. 11. “We’re at a moment where we’re being confronted by multiple crises that have converged—a public health crisis, an economic crisis, a long overdue reckoning on racial injustice, and a climate crisis. We have a lot we need to handle in the days ahead but I know together we can get it done,” she also penned. The cover is historic as it marks the first time a Vice President-elect has appeared together with a President-elect on the Person of the Year cover.

Joe made headlines a couple weeks ago after twisting his ankle while playing with his German Shepherd Major (who, by the way, is the first-ever rescue dog moving into the White House).The real-life Joe was sent to an orthopedist “out of an abundance of caution” on Sunday, Nov. 29. The 78-year-old appeared to be in good spirits on Dec. 1, where he was spotted wearing a medical boot leaving The Queen Theatre in Wilmington, Delaware, which is his current headquarters. Joe noted he felt “good” as he flashed a thumbs up to reporters, clearly showing no signs of slowing down. Dr. Kevin O’Connor — who examined Joe — said that “initial x-rays did not show any obvious fracture,” but he later noticed small fractures in his foot. The doctor also said Joe will probably “require a walking boot for several weeks.”

As for Jim Carrey‘s Joe, he appears to be taking an absence for a few weeks — but fans can’t wait for him to be back! The Canadian-born actor joined the long-running sketch series back in September, which show runner Lorne Michaels was thrilled about. “There was some interest on [Jim’s] part. And then we responded, obviously, positively. But it came down to discussions about what the take was,” Lorne said in an interview with Vulture magazine. Notably, the Ace Ventura star was never a full-time cast member on SNL, despite auditioning back in the ’80s — but he has hosted on a number of occasions.