Zoe Colletti stars as Dakota in the all-new season of Fear the Walking Dead. She made her first appearance in the Oct. 18 episode. Dakota is the younger sister of Virginia, the leader of the Pioneers. Dakota is a rebellious teenager who will undoubtedly be giving her big sister trouble this season. HollywoodLife talked EXCLUSIVELY with the young actress about exploring more of Dakota and Virginia’s complex relationship in season 6.

“We are going to dive into some really interesting dynamics between Virginia and Dakota,” Zoe teased. “Whether it’s good or bad, I definitely can’t say. Even if it wasn’t the apocalypse, any kind of parental figure for a teenage girl would be a super interesting relationship to look at. But when you throw zombies and the apocalypse into that, it’s obviously going to cause more drama.”

Given that her sister is the leader of the Pioneers, should we trust Dakota? “Dakota has a lot of really cool character arcs throughout the season that I was super thankful and honored to get to play on the show with this cast,” Zoe continued. “She has an interesting plotline. Unfortunately, I can’t really say a ton about the direction the show is going to go into. But I’m sure you can imagine that being under the regime in this kind of town with the type of person that her older sister is, you’re bound to see some pretty interesting things happening with Dakota.”

Before getting cast on Fear the Walking Dead, Zoe considered herself a fan of The Walking Dead universe. “I was an avid fan,” she revealed. “I was sometimes waiting six hours in line to get autographs. It was an obsession for me. I remember when I was younger and first watching the show, I was tweeting the creators, ‘Please, I’m an actor. I’ll just be a zombie. I don’t care. I’ll be an extra. I just want to be on the show.’ So going from that at like 12 years old and now being almost 19 and being a part of the show in a serious role is pretty surreal for me. It’s coming almost full circle for the one job that I felt was my dream show to be on.” 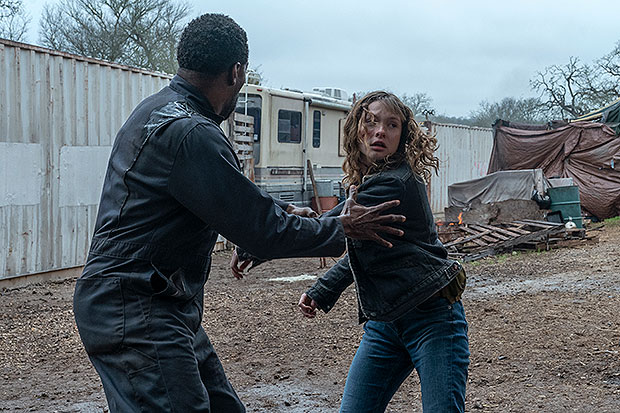 Zoe Colletti in the Oct. 18 episode of ‘Fear the Walking Dead.’ (AMC)Zoe couldn’t help but rave of her new co-stars. “I couldn’t ask for a better group of people to be jumping into a show that’s already so successful. It’s been a phenomenal experience to get to join this cast and be a part of everything.” Fear the Walking Dead season 6 airs Sundays at 9 p.m. on AMC.