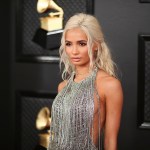 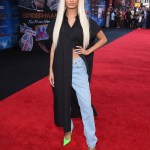 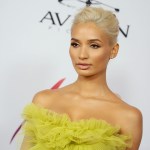 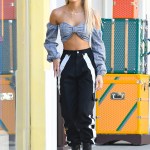 Pia Mia returns as Tristan in the ‘After’ sequel. She spoke with HL EXCLUSIVELY about going outside her ‘comfort zone’ with acting, the inspiration behind sampling pal Chris Brown’s song, and more.

After We Collided makes its long-awaited debut in the U.S. on Oct. 23. Pia Mia, who made her acting debut in the first After movie, is back as Tristan. The 24-year-old singer talked with HollywoodLife EXCLUSIVELY about becoming a part of the After universe and experiencing its “rare” and passionate fandom.

Pia also discussed her latest song “HOT” and the inspiration behind it. She walked us through how she ended up flipping her friend Chris Brown’s song “Kiss Kiss” to create “Princess.” Read our Q&A below.

You play Tristan in the After movies. Had you always wanting to get into acting?
Pia Mia: Obviously, music is my number one, but I’ve always been interested in acting. It’s a challenge for me, and it’s different for me. It’s out of my comfort zone. So I like to put myself in positions like that to force myself to grow and learn more and have new experiences. It’s definitely a challenge. But that’s what I love about it, and I would for sure want to do more of it. Absolutely.

After has an incredible fandom. What’s it been like to be a part of that world?
Pia Mia: I felt so welcomed and so grateful to be accepted by them. It felt like they just brought me right into their family as if we had always been family. I think that’s such a rare thing and really reminded me of back home because when you come to Guam we welcome everybody and we take you in. It was a similar feeling that I got from the After fandom. I also loved Anna Todd. I had just the most fun being on set with everybody. From start to finish, it was a great experience. On top of that, during that time, I was independent and dropped a song called “Bitter Love,” which was such an important song to me that I had wanted to drop for so long and that fandom really believed in the song and really gave it a platform at a time when I was independent and didn’t have a platform to push the song.

“Bitter Love” became After’s theme song. How did it feel to have your song be featured in such a big way?
Pia Mia: It was just such a big deal for me having that be the theme song. I was just so grateful. What was interesting was when we were going through songs to see what we thought would sound good or fit in the movie, when we played “Bitter Love,” it was exactly Hardin and Tessa’s relationship. I saw a lot of the fans saying that too, so it’s crazy and just shows how we can all relate to each other. We all go through similar things, so that’s why we’ve got to be here for each other.

As someone inside the After world, what do you think is so alluring about the Hardin and Tessa relationship?
Pia Mia: I think it’s honest. It’s fantasy, but at the same time, you get the reality of it. Love is not perfect, it’s not easy, and every day isn’t smooth sailing. You have these ups and downs, you have these insecurities or these moments where you kind of have to decide: am I going to push through this or am I going to just walk away from the relationship? I think Hardin and Tessa go through that so much. I just love that Anna made it real.

Your new song “HOT” is a total banger. What was the inspiration behind this song?
Pia Mia: Well, when I made “Princess” and “HOT” and the new music that’s to come, really my vibe was just I want to feel good. I want to feel sexy. I want to be light, and it was really just as simple as that. The songs are not that deep and not that serious. That’s what I wanted it to be. I wanted it to be an escape for a moment and just be a fun vibe for people to listen to, so that’s what I was going for with “Princess” and for “HOT.”

“Princess” samples Chris Brown’s song “Kiss Kiss.” When did you come up with that idea?
Pia Mia: I was driving my car and put on throwback songs and “Kiss Kiss” came on. Anybody who knows me knows I love Chris and knows I love T-Pain. So I had a studio session that night, and when the song came on in the car, I was just so inspired. I felt so good. So I went to the studio and was just like, this is what I want to do. I want to flip the song. We wrote the song so fast. We had so much fun in the studio just laughing and vibing. It was just one of those nights where everybody was on one, and it did not feel forced in any way. So that’s how “Princess” came about. I love Chris, I had a lot of success with him with “Do It Again.” I have always loved him as an artist and looked up to him. I think he’s so talented. Same thing with T-Pain. I have listened to his music forever. Everybody knows if I’m walking into the club, T-Pain better be playing.

Did you talk with Chris and T-Pain about flipping the song?
Pia Mia: I flipped it before I talked to anybody, and then we sent it to them obviously to make sure we had their blessing. I was just so hyped the day that we made it. It all happened in one day. I just went straight in and did it. They both gave their blessing. I would never put anything out that sampled somebody’s song that didn’t vibe with it.

You are working on your debut studio album. Is there a theme that you’re going for? How are these songs coming together?
Pia Mia: Well, I newly signed to Republic Records and Electric Feel at the end of last year, so it has been so refreshing to find my team and feel settled and chill at home. I’m so grateful for just everybody that I have as part of the team here supporting me and excited about this project. We recorded a lot before the pandemic hit, and I’m so grateful we did that because now we’re dropping these singles. But I think right now we’re just going to focus on that because when I drop an album, I want to be able to tour and be on stage and see people face to face. So for now, it will be singles. When there’s an update, girl, I’m calling you.