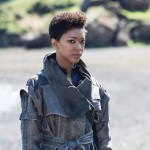 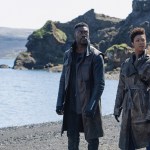 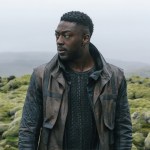 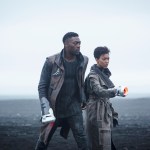 Book has already made quite an impression on ‘Star Trek: Discovery.’ HL spoke EXCLUSIVELY with David Ajala about Book’s connection with Burnham, Book’s backstory, and Book’s respect for Grudge.

Cleveland “Book” Booker is the exciting new addition in Star Trek: Discovery season 3. David Ajala stars as the new character Burnham (Sonequa Martin-Green) meets when she ends up in the future. While they didn’t start off in the best way, Book and Burnham eventually came to an understanding and have vowed to work together to find Burnham’s ship and crewmates. But does Book trust Burnham and does Burnham trust Book? David weighed in on this exact question.

“I think for Cleveland Booker it’s not so much the case of who he trusts and who he doesn’t, I think he’s just a one-man team, a one-man band, that operates very effectively by himself,” David told HollywoodLife EXCLUSIVELY. “He’s learned to be self-sufficient. He doesn’t have to rely on other people. Those reasons will unfold throughout the season. So in terms of bumping into Burnham, I think what transcends his concept of trusting her or not is there’s something in her eyes that he recognizes. It’s someone who is duty-bound to fulfill a purpose that is greater than themselves. It’s not something he gives away in any instance with Michael Burnham, but he recognizes it, and it’s enough to allow him to go against his better judgment to help her.”

Book and Burnham will be at the center of season 3, and David teased how their relationship will evolve. “It’s going to be really cool to see that dynamic develop because our first introduction to these two characters is to see them in a state of complete hostility towards each other,” David said. “Well, more hostility from Book towards Burnham than Burnham towards Book. So to know that that’s the introduction, and then throughout the season, we see how these two individuals are very different but also very similar. It’s going to be really charming to see how they bring out the best in each other, and challenge each other’s concepts of what’s right and what’s wrong, what works and what doesn’t work. I’m really excited for the fans to see how that plays out.”

During the season 3 premiere, Book mentioned The Burn, a mysterious event about 100 years prior where the “galaxy took a hard left.” David talked about how the premiere and information revealed in it will “serve a purpose” later in the season.

Other than Book, the biggest scene-stealer of the season 3 premiere was Grudge, Book’s cat. If you already love Grudge, get ready to see more of Book’s furry friend. “Grudge is very, very special to Cleveland Booker,” David stressed. “If we’re talking about the concept of family, Grudge is part of Cleveland Booker’s family. What’s so wonderful about their relationship is his respect for Grudge and in turn Grudge’s respect and love for Cleveland Booker. I’m really looking forward to the levity that Grudge is going to bring to the show.” He also added that fans will continue to learn more about Book and his history, which will end up “tugging on the heartstrings a little bit.” New episodes of Star Trek: Discovery season 3 are released weekly on Thursdays, exclusively for CBS All Access subscribers.