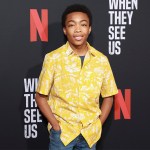 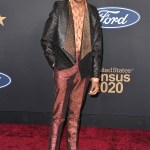 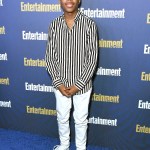 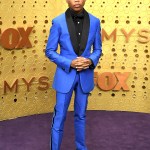 Asante Blackk stars alongside his own dad in an episode of ‘Social Distance.’ HL spoke EXCLUSIVELY with Asante about the show, his dad first-ever role, and why he’d ‘never trade’ this experience for anything.

Netflix’s new series Social Distance, out Oct. 15, is an 8-part anthology series that follows different people and families in the initial months of the COVID-19 pandemic. Asante Blackk stars in an episode that follows a young man who clashes with his boss about racial injustice and American history in the wake of George Floyd’s death. Asante’s boss in the episode is played by his own dad, Ayize Ma’at.

HollywoodLife talked with the When They See Us Emmy nominee and This Is Us star about acting alongside his dad and filming the entire episode themselves at their home. The 18-year-old revealed that this experience has inspired him to want to go behind the camera in the future. Asante also spoke about what he’s been doing during quarantine and how he’s been making his voice heard.

You’re working with your dad. First and foremost, what was that like? Working with parents can be definitely interesting.
Asante Blackk: I think overall it was a very good experience and a very good bonding experience for me and my dad. It was actually pretty interesting. We had no idea that he’d be acting in this when we first agreed to do it. We thought it was going to be a documentary actually about documenting people’s lives in quarantine. And then, all of a sudden, my agent sent some sides for my dad to audition with. We were like, wait, what’s going on? But overall, we just really focused in on the sides, and I gave him as many tips as I could from what I’ve learned in my couple of years in acting. He killed it. I think it was a really great experience, and it was a really good teaching experience for me as well to show, even when you’re not necessarily in a craft and you’ve had no experience in it, what you can do when you really focus in and laser in and really put your mind to it. It very inspiring for me.

Was this your dad’s first-ever acting role?
Asante Blackk: Yeah, the closest thing he’s ever done to this spoken word.

You guys had to film this yourself. That is a whole different ballgame. What was that like for you and your dad to have to navigate that?
Asante Blackk: I’m actually interested in what my dad thinks about it because I’m used to everybody doing everything for me, but this is his first-ever experience. I’m sure that he probably felt the same way, but I think I have a different outlook on it because I’ve had other experiences. For me, it was very, very tiring. A lot of work. You had to expend so much emotional energy into the work itself. But then also, we were filming outside in the sun, and it was hot outside. We had to move the props around and play with the cameras and all those things. I think it was a lot of work. But overall, it was an experience that I’d never trade for anything because now I can say I’m a cameraman, I’m a grip, I’m everything.

Has this made you want to down the road explore producing or directing?
Asante Blackk: Definitely. I’ve always wanted to get into producing and directing, screenwriting, everything. I want to do everything on that side of the industry.

How did the rest of your family go through this experience with both of you doing something together on such a large scale?
Asante Blackk: I think that the biggest impact that it had on my family [was] two of my younger siblings, they play basketball, and we have court in our backyard. But because we were filming in our backyard, they weren’t allowed to go out there and play at all. So I think that that’s the biggest impact that it had on them. But, fortunately, the production team was nice enough to give us another hoop because they weren’t allowed to play for that amount of time. But they were all very supportive. And we all came together to say this is what we have to do for this amount of time. It’ll probably be a little different from what we normally have to do [with] staying in the house while we shoot, but overall it was really good.

The past 6 or 7 months have just been so different for everyone. For you as an actor, outside of Social Distance, what has a quarantine been like for you just trying to navigate what is going to happen with roles, auditions, all of that kind of thing?
Asante Blackk: It’s been a lot of anticipation and wondering when things are gonna get back going again. I actually really wasn’t doing much at all during quarantine. I was kind of just doing what I was doing before I even got into the industry, which was reading scripts of movies that I loved or watching great movies and kind of just brushing up on my skills in that way. But it really wasn’t until a month ago when Hollywood kind of opened back up, and we started figuring things out. But that entire time, I guess it was anticipating the unknown really.

Has your dad’s gotten a little bit of the taste of the acting bug? Does he want to maybe do more in the future?
Asante Blackk: He definitely does. If anybody sees this and wants to hire him, hit him up.

When talking about something as important as the Black Lives Matter movement and Breonna Taylor and George Floyd, for you as a young Black actor, how have you been getting involved in making your voice heard?
Asante Blackk: I started a series during quarantine called Speak Up series with a couple of my good friends. Me and my friends thought of that idea a couple of days after the video of George Floyd’s passing came out because we were just really frustrated and really angry. I actually wanted to get out there and protest, and I wanted to do all those things, but I’m the oldest of five siblings. I have such a big family. The youngest is four years old, so I decided it probably wouldn’t be smart because coronavirus is still out there. If I contracted something and brought it back home that wouldn’t be the best. So I had to figure out different ways to organize. I think that it was a very good way because it also shows, outside of protesting on the street, we have so many other avenues to really make our voices heard and to make our feelings heard and try to come up with solutions along with some of our other friends.