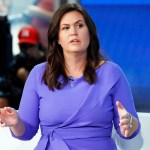 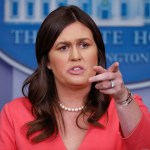 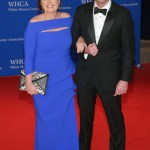 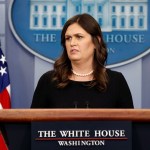 An awkward moment with Kim Jong Un ended with an even more awkward comment from Donald Trump, Sarah Huckabee Sanders writes in her new memoir. He joked that they should hook up!

Sarah Huckabee Sanders reveals in her upcoming memoir, Speaking for Myself: Faith, Freedom, and the Fight of Our Lives Inside the Trump White House, that Donald Trump once told her to “take one for the team” and hook up with Kim Jong Un. The former White House press secretary, 38, writes that the president made the joke after the North Korean leader allegedly “hit on” her during an event in Singapore in June 2018, according to The New York Times. Sanders described herself as “stunned” after they “made direct eye contact and Kim nodded and appeared to wink at me.”

“I quickly looked down and continued taking notes and for the rest of the meeting only looked up from my notes in the direction of the US delegation,” she wrote about the summit. She recalled the incident with Kim later to Trump and the White House chief of staff at the time, John F. Kelly, during the flight back to the United States on Air Force One. The two men “burst out laughing,” Sanders said. “Kim winked at you? Are you telling me Kim Jong-un hit on you!?!?” Trump asked her, incredulously.

She insisted that wasn’t what she meant, and asked Trump to cut it out. “Well, Sarah, that settles it,” Sanders said the president joked. “You’re going to North Korea and taking one for the team! Your husband and kids will miss you, but you’ll be a hero to your country!” She stressed that it was a joke, and writes glowingly about the president throughout her memoir, according to The New York Times.

The summit between the US and North Korea was to reach an agreement to “cooperate for the development of new… relations and for the promotion of peace, prosperity, and security of the Korean Peninsula and of the world,” per the White House. It was the beginning of Trump’s tenuous relationship with Kim after initially threatening him with nuclear proliferation on Twitter. Trump became the first US president to step foot in North Korea one year later.

Sarah Huckabee Sanders’ book, Speaking for Myself: Faith, Freedom, and the Fight of Our Lives Inside the Trump White House hits bookshelves on Tuesday, September 8.