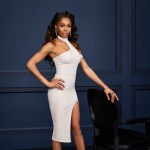 Juan secretly sought relationship advice from Gizelle during the Aug. 9 episode of ‘RHOP’. Plus, Candiace took a pregnancy test and Monique started questioning a friendship.

Relationships started to shift during the August 9 episode of The Real Housewives of Potomac. Not only did Juan Dixon reveal he wants to remarry Robyn, but Monique Samuels started questioning her friendship with Candiace Dillard after realizing that Candiace had recently befriended Charrisse.

Apparently, Charrisse had spread rumors about Monique — rumors so bad that Monique refused to discuss them on camera — so Monique wasn’t too happy to see Candiace bringing her around the group again. (Side note: Gizelle Bryant later revealed in her confessional that the rumors involved Monique allegedly getting too close to her fitness trainer, and her husband, Chris Samuels, eventually found out.)

Anyway, after Juan told Gizelle that he wants to propose to Robyn again, and needs her help picking out an engagement ring that she said should be “double” the size of the first one, the ladies got together to help Ashley Darby deal with her post-partum depression. However, Ashley’s “coming out” party quickly turned into a “gang-bang” for Candiace. And by “gang-bang” we don’t mean what you think we mean — Karen Huger naively referred to their interrogation on their co-star as such.

During dinner, Gizelle asked Candiace to apologize to Ashley for throwing a ton of shade at her last season. And even though Candiace was open to doing so, she wanted to have a one-on-one conversation with Ashley privately. However, the ladies didn’t agree with her, and they kept pushing her to “just apologize”.

Things only escalated from there — especially after Monique clapped back at Candiace for befriending Charisse — and Candiace eventually told everyone to STFU. And then the episode ended with a “to be continued”, but if you missed it, you can watch the entire episode above!