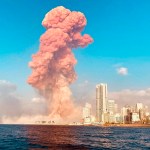 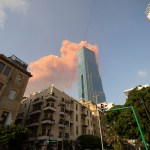 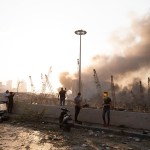 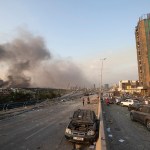 A massive explosion in Beirut has left 10 dead, ‘dozens’ wounded, and buildings damaged throughout Lebanon’s capital. See footage from the blast and get more information, here.

A horrifying explosion rocked the Lebanese capital on August 4, when an out of control fire ignited “highly explosive materials” contained in a warehouse at the city’s port, according to Reuters. Footage captured of the incident showed a giant cloud of pink smoke rising in the sky near the port, which then exploded into a massive fireball. The explosion shattered windows and leveled buildings across Beirut, leaving at least 10 dead and “dozens” more wounded.

After the blast, many roads throughout the city were blocked by debris, forcing wounded people to walk through billowing smoke to get to nearby hospitals. Damaged buildings in the area included the headquarters of former Lebanon Prime Minister Saad Hariri, as well as CNN’s Beirut bureau, according to CNN. Balconies collapsed, and storefronts were destroyed, leaving residents vulnerable to shattered glass. The explosion was heard 150 miles away in Cyprus, Reuters reported.

It is very sad to hear about #Beirut explosion. The lives of millions are already affected due to COVID-19 & this tragedy further aggravates human pain. Heartfelt condolences to everyone caught up with this unfurling disaster. May almighty shower some blessings to mankind. pic.twitter.com/olbylQc29h

Beirut residents described their buildings shaking like an earthquake. “The apartment shook horizontally and all of a sudden it felt like an explosion and the windows and doors burst open. The glass just broke. So many homes were damaged or destroyed,” Rania Masri, who lives in Beirut, told CNN. Photos out of Beirut show streets covered in ash and debris, as stunned residents face the aftermath.

.@BillNeelyNBC reports the latest on the massive explosion in Beirut.

"The cause is unknown." pic.twitter.com/ydBvO1zs6E

Beirut’s governor, Philip Boulos, wept during a press conference following the blast, likening the explosion to Hiroshima and Nagasaki, the Japanese cities leveled by atomic bombs during WWII. The Lebanese Broadcasting Corporation International (LBCI) revealed that Prime Minister Hassan Diab‘s wife and daughter were “slightly injured” but did not provide further details about their status.