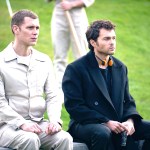 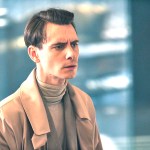 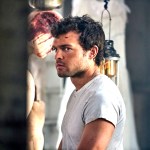 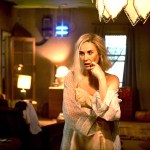 Joseph Morgan’s newest role is in the Peacock series ‘Brave New World.’ He spoke with HL about taking on CJack60 after Klaus, how the show compares to the classic novel, and more.

Brave New World is one of Peacock’s new shows that will debut on July 15, the streaming service’s launch day. The series is the TV adaptation of Aldous Huxley’s 1932 classic of the same name. While familiar characters from the book are present in the show, the Peacock series has added new characters to the mix.

That’s where Joseph Morgan comes in. The actor, who previously played the beloved Klaus Mikaelson on The Originals and The Vampire Diaries, is playing CJack60, an Epsilon who is deeply affected after witnessing a horrifying incident. Joseph talked EXCLUSIVELY with HollywoodLife about this “emotional” and “intense” character who is very different from Klaus.

After playing Klaus for so long, what was it like stepping into a role that is so radically different?
Joseph Morgan: It’s interesting because I’ve played a lot of characters in my life, but certainly Klaus I played for like 9 years I think. That’s obviously by far the longest I’ve played someone. It’s interesting because you’re trying to discover someone new, and the thing for me about CJack60 was he’s sort of the opposite to Klaus because, with Klaus, you have 1000 years of history to use as your backstory. Whereas I felt like the Epsilons live moment to moment. They didn’t dwell on the past or think about the future. They were really just very present and very about where they were and what they were doing in that particular moment until CJack60 starts to feel these emotions, which is so unfamiliar to him. He starts to question his place in the world and his reality. But really the starting point of CJack60 was quite meditative because it was very present and very lacking in any kind of preconceptions. It was like a complete flip side to the coin.

Aldous Huxley explores emotional conditioning in his classic novel. How did it feel to really dive into that aspect of CJack’s character?
Joseph Morgan: I was constantly trying to pull myself back because my instinct sometimes is to go intense and to go in very emotional and intense with a scene, which can work really well for something like The Originals, which was quite theatrical in a way. But with CJack, I really wanted the emotions to be like flood gates where they would occasionally crack for a second and then they would close down and then they’d be shut again until the end where he really opens up and starts to become his true self. It was all about holding back and keeping that pot bubbling with the lid on top.

Anytime you take a beloved novel and turn it into an adaptation, there’s a lot to work with. And there’s also a lot to add. How much would you say the show stays true to the book and where does it explore more?
Joseph Morgan: I would say it paints a very vivid picture of the world created in the book. Certainly, the way the book starts with Bernard going to the Savage Land with Lenina and them bringing John back to New London and him being a fish out of water in New London, I’d say that’s where it kind of splits off. John’s journey differs and this revolution that is started in New London is the new aspect. And then also, the Epsilons in the book are pretty peripheral. We get a sense of what they are and who they are and their place in society, but we don’t follow anyone in that journey. The CJack journey is something new in the show, and that’s where it differs again. It differs especially as we get to the finale, which is when the show really comes into its own.

What it like bringing to life a new character in a world people are already familiar with?
Joseph Morgan: It was great. He was kind of a blank slate, so his arc started really just before we found him in the series. I could be very familiar with the mechanics of how New London worked in that world but really had the opportunity to develop how this character explored these emotions he was feeling myself, and David [Wiener] was also very open to that. The great thing was that only a few of the scripts were written when we started, although they had a general outline. They freed themselves up to develop the characters according to what worked and the direction that they seem to be growing in themselves, which was nice for me because then I got the opportunity to explore slightly different aspects and certainly to have a great finale that CJack was very much a huge part of.

What can you tease about his dynamics with other characters in the show?
Joseph Morgan: Well, I would say that primarily he has run-ins with other characters certainly, but primarily, CJack is involved with Mustafa Mond, who is played by Nina Sosanya. She’s a wonderful actor. I really enjoyed doing my scenes with her because she sort of guides CJack towards this ultimate goal. And then also with John, who is played by Alden [Ehrenreich]. That’s an interesting relationship because John is an outsider coming from the Savage Land to New London, and CJack has just started to feel these things he’s never felt before and explore the mess of emotions happening inside him. John helps cultivate that by telling him that you don’t have to live like this, and the world can be what you want it to be, you can forge your own destiny, so that’s very inspiring. It’s a great relationship.

Speaking of New London, how did it feel to become immersed in such a futuristic world?
Joseph Morgan: It was incredibly exciting because it’s a big-budget show, as you can see when you watch it. There were a lot of incredible sets that were built on sound stages that were a joy to explore in my off time. Filming in locations like the Walkie Talkie building in London and looking out across London knowing that the skyline was going to be modified with visual effects to create New London was exciting as well because there were aspects of the surroundings of the city that we weren’t seeing that we knew were going to be put into the final product. It was also bizarre because a lot of the Epsilons are identical, so you had scenes where there were a dozen guys wearing rubber masks in my face. It was a whole kind of weird nightmare that I’m still reliving [laughs]. It was an interesting and very exciting and fresh experience.