“Is it just me, or do you ever feel like time just flies?” asks Krewella at the start of “Rewind,” their new song with fellow DJ duo Yellow Claw. On this track, Krewella – aka sisters Jahan and Yasmine Yousaf – get caught reminiscing about years and loves passed (“I’ve never been good at saying good-bye / so I’ mma let the memories get me by). The production of “Rewind” strengthens this retrospective point of view. It’s as if listeners are experiencing a soundtrack to Krewella’s memories. While there’s a little twinge of sadness over what was lost on the past, the song – through its production and vocals – conveys a bit of optimism for what’s next in the future.

“We wrote ‘Rewind’ about the bittersweet feeling of losing yourself in memories,” Krewella tells HollywoodLife. “How moments and emotions seem to vanish in the blink of an eye, and suddenly it’s a month, a year, sometimes a decade later, and you feel like everything you’ve experienced is a fictional story. The ‘you’ from the past is a familiar stranger. You’re sad that it’s all gone, but happy that it led you to where you are right now. They say nostalgia is like a drug, likely because it’s so easy to get stuck in the past, but this song is about letting yourself slip into it knowingly and enjoy it with reckless abandon.”

This song is exceptionally poignant, considering Krewella’s history. At the start of the year, the sisters returned with zer0, their first album in seven years. Their dubstep-oriented debut, Get Wet, debuted at no. 8 on the Billboard 200 in 2013, and had successful appearances at virtually every major dance music festival. Their career was derailed in 2014 when they parted ways with a former bandmember (who then sued the sisters.) Six years after that, the sisters released their long-awaited follow-up.

“When zer0 came out, our dad texted us this inspiring message saying how every single moment is an opportunity to start again at zero,” Jahan told Spotify. “I think that’s such a good reminder. The phrase “zero o’clock” keeps coming into my head—the idea that this moment is all we have, and whenever we are holding onto the baggage of the past or anxious about the future, it’s because we’re not living in that sacred space of zero.” 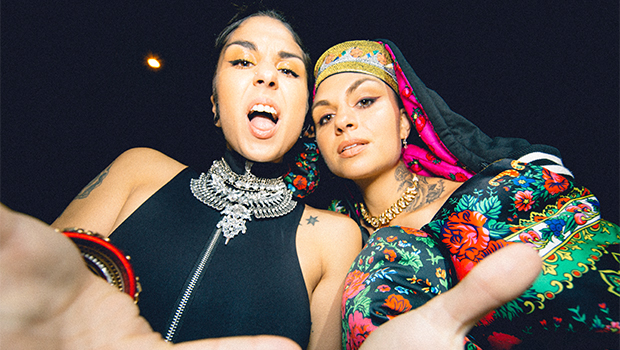 “It’s scary to release a body of work you’ve been developing for so long,” added Yasmine. “But eventually you need to let go, and I’m so excited and refreshed by the fact that people can hear who we’ve evolved into, and where we’re going next because everything is a stepping-stone. I love that people are getting to know us better, little by little.”