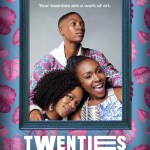 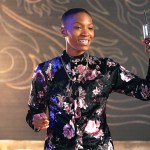 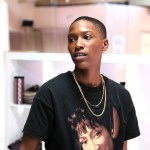 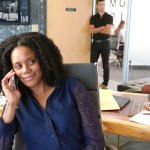 The audition for Hattie in ‘Twenties’ was Jonica T. Gibbs’ first audition — ever. HL spoke with Jonica about becoming Hattie, what she’d like to see in season 2, and more.

The critically-acclaimed BET series Twenties burst onto the scene in 2019 and became an instant hit. Lena Waithe created and wrote the series that follows Hattie (Jonica T. Gibbs), a queer Black girl who is chasing her dreams of being a screenwriter in Los Angeles alongside her two best friends, Marie and Nia, played by Christina Elmore and Gabrielle Graham. As they navigate their twenties, the girls lean on each other through good times and bad.

Jonica’s terrific performance throughout the first season proved why she’s one of the best new actresses on television. She talked with HollywoodLife EXCLUSIVELY as part of our Emmy Contenders series about the “unique” audition process, which was her first-ever audition. She also opened up about her season 2 hopes and her reaction to what happens to Hattie in the finale.

What was the audition process like for Hattie?
Jonica T. Gibbs: The audition process for me was very unique. I was doing stand up comedy, and I wasn’t signed with anyone. I didn’t have a manager or an agent or anything like that. Basically, with my best friend we co-wrote scripts to do a web series called No More Comics In LA. We started shooting it with a few of our friends. At that time, I was substitute teaching long-term and then I took a job serving tables at The Cheesecake Factory. We were shooting at the same time, and I just became pretty exhausted. We hired a company to help crowdfund and we raised money. We reached out to a few people, and Lena was one of the people that we reached out to. She gave me an opportunity to audition, and the rest is history. I read the script and fell in love with the character.  I just kind of came up with my own curated outfit to wear to the audition that I felt fit Hattie’s personality. I was pretty chill about it, apparently. Honestly, since then, I’ve never had an audition like that ever. Because the energy of the women that were auditioning with me and against me was so incredible. It was my first audition ever. I didn’t know any different, but they were saying like, wow, we’ve never done an audition where everybody’s sitting outside helping each other run lines or just having such amazing chemistry and conversation. We even took a group photo. They were right. Since then, you don’t go into audition rooms and chat. It was definitely a unique experience for me.

The role of Hattie is inspired by Lena. When you talked about the character, did you add your own nuances? How did that collaboration work?
Jonica T. Gibbs: Lena was very dope about giving me the autonomy to kind of bring my own perspective to the character. I really appreciated that because I hit her up and was like, “Hey, do you want to hang out so I can pick up your mannerisms?” I was ready to go and imitate her. She told me that the character was loosely based on her and for me to do my thing. I love that because it felt very collaborative in that regard, but I definitely had to get my words right. If I needed direction, the directors or Lena even would give me direction. There were definitely scenes where Lena was like, “No, do it over because I want you to do it this way.” For the most part, she let me go. But there were moments like the scene between Hattie and her mom when they had an argument in the office, Lena definitely wanted that scene to feel exactly how she felt it when she read it.

The show ended on quite the note with Hattie and Ida’s kiss. Were you surprised by that ending?
Jonica T. Gibbs: I was surprised by the ending. I think that it’s a great setup for next season. It was a great cliffhanger. A lot of people have hit me up about it saying, “I knew it!”

Is there anything you definitely want to explore with Hattie in season 2?
Jonica T. Gibbs: It would be dope to get more episodes, so we can have more time. It’s a 30-minute show, so it goes pretty fast. The biggest response I’ve gotten from people is that they wish it was longer. It’s not necessarily a true 30 because of the commercials. I think that Twenties did a great job in the first season of giving perspectives around each character so that people can build relationships with each character. It would be nice to see things just be more in-depth and go deeper. There would be more conversations around just the normalization of being Black and being queer and being in certain spaces period. I think it would be great to see how we have to maneuver through different spaces. I think that would be interesting to consider, especially with some of the things that are going on in the world.

One thing that really stood out to me about Hattie was her confidence. She is just unapologetically confident in herself. In a lot of shows, her sexuality would have been the primary focus of her character, but it’s kind of the last thing you think about with her. She’s just living her life, and she just happens to be queer. Was that refreshing for you?
Jonica T. Gibbs: It’s very, very refreshing. That’s actually the first thing I fell in love with because most queer people probably have gone through changes in their life. Even if you went through it as a child, your parents probably put you in a particular type of clothing initially based off of your gender and in whatever way they felt was best. So every queer person has probably gone through some type of transition and stuff like that. I found comfort in her confidence because she lived in a world where nobody questioned her. Nobody saw her as different, and that’s really what my life is now. The thing is, when I got the audition for Twenties I was pretty much in that space because I, at that point, had come out to my family and I was dating. I was out, it was known, and I could actually talk about it at a comedy show and then post it and not feel like, “Oh my God, my family might see it.” Being Hattie is great for audiences to see someone not just as queer, but just like you said, uniquely and confidently themselves and maneuvering through spaces that are normal, and she doesn’t care. Nobody’s considering each other’s sexuality. It’s not all about sexuality. We are such a multi-layered and multi-faceted human beings. It’s just dope to see a character use that space to be human.

How does Hattie’s experience mirror your own?
Jonica T. Gibbs: I also stayed on my friend’s couch when I first moved to LA. Not because I was been evicted, but I was fresh to LA, and she lived with her boyfriend. The thing is, I didn’t get comfortable like Hattie. Hattie really melted into it. I was like, I will be here for a month. They didn’t give me a time frame. I just was like… Y’all live together. This is a personal thing. I’m not trying to get comfortable at all. I wasn’t like Hattie. I did go three months without paying my rent, but my landlord didn’t kick me out. He was an angel sent from up above because he allowed me to create like a payment plan to pay him back. Who lets you get behind three months’ rent and doesn’t stress you out? He was so calm about it. He knew I had just run into some hard times. Thankfully, you run across people who are empathetic. Other than that, I have dated a straight woman, and that’s a mess. I’m glad to have those times behind me.