The 2020 BET Awards were not going to go down without addressing the deaths of George Floyd, Breonna Taylor, Atatiana Jefferson, Ahmaud Arbery, Tony McDade, Rayshard Brooks, Elijah McClain and the unfathomable number of Black men and women killed by police officers in America. During a somber moment June 28 broadcast, a number of some of the biggest names in entertainment — Spike Lee, Viola Davis, Tracee Ellis Ross, Michael B. Jordan and more — read a list of names. These were the as Black Lives Matter co-founder Patrisse Cullors said at the end, just a fraction of the “400-year-old pandemic known as racism.”

Expecting the BET Awards to not speak on the recent killings would be foolish, especially since the network called for action following George and Breonna’s killings. The show indicated that things were going to get political when, on June 24, they announced that Black Thought, Questlove, Nas, YG, and Public Enemy would join the already star-studded lineup of performers. The Roots joined Gary Clark Jr. at the 2020 Grammys to perform “This Land,” a song he told NPR in 2019 was inspired by a firsthand encounter with a racist neighbor. YG and the late Nipsey Hussle released “FDT” (which stands for “F-ck Donald Trump”) in 2016. Nas put out “Cops Shot The Kid” In 2018, and Public Enemy’s “Fight The Power” is a Black power anthem. Many would argue that all Black music is political in nature, so it’s likely that many viewers went into this show prepared for a night celebrating Black joy and excellence while also defying the institutions that would see them broken.

Though George Floyd’s death was the impetus for nationwide protests, the anger behind those demonstrations didn’t come out of nowhere. Studies show that black men in America are up to 3.5 times more likely to be killed by law enforcement than white men, according to UC Berkley’s Prof. Osagie Obasogie, when writing for the Washington Post. 1 in every 1,000 black men will die at the hands of the police, and Business Insider pointed out that Black people make up 33% of the country’s prison population – despite making up 12% of the United States’ total population. Overall, Black men are roughly five times more likely to be imprisoned than their white counterparts. Justice reform advocates say that the system unfairly targets Black people, stating that Black defendants are more likely to get arrested for drug charges than white Americans (though usage rates remain comparable), are more likely to be denied bail, and are more likely to receiver harsher sentences than white defendants.

It’s not just with the police. Black people have historically faced higher unemployment numbers – with their rate consistently twice that of Whites over the past 60 years — with more jobs going to white Americans than Black Americans. When a Black person does get a job, they’ve reportedly earned less than their white counterparts, per Insider. This makes it harder for them to obtain upward mobilities, and the poverty rate for Black families is over twice that of white families. While formal discrimination for home loans is illegal in the US, studies show that Black applications were more likely to be denied a mortgage loan than other aspiring homeowners of other races. This means that it’s less likely that a Black household owns their home (or any property.) 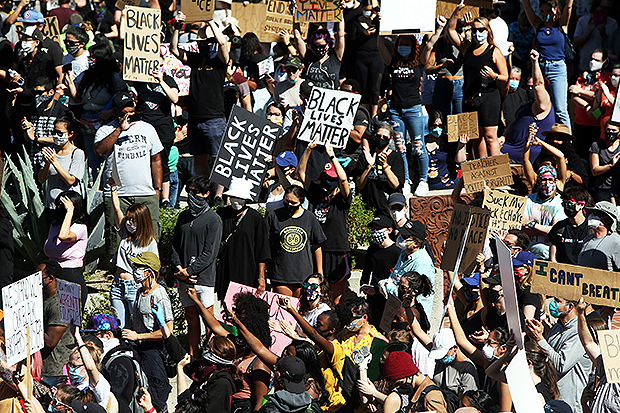 That is just the tip of the iceberg, and it’s a problem so apparent that even Ben & Jerry’s — yes, the ice cream company – called out America over its systemic racism. While many brands pledged to “do their part” in the fight against racism, Ben & Jerry’s brought receipts, linking to studies that pointed how Black students are three times more likely to be suspended than white students for the same infractions, that Black people with college degrees are likely to be passed over a job if their name isn’t “white-sounding enough,” and that majority of medical doctors have “unconscious racial biases” when it comes to Black patients. That could also explain – along with how Black Americans were nearly twice as likely to lack health insurance than white people in 2018 — that the COVID-19 pandemic has had a disparate impact on people of color. In an early CDC study of coronavirus hospitalizations, a third of those within the areas studied were Black.

For those interested in helping out the Black Lives Matter efforts, here is a list of available organizations/resources, and The Root has an introductory guide for how white people can be better allies.