“Dear Trump Campaign, F-ck you,” tweeted Panic! At The Disco’s Brendon Urie late on (Tuesday) June 23. This furious message came days after President Donald Trump’s campaign reportedly played P! ATD’s “High Hopes” during Saturday’s sparsely-attended rally in Tulsa, Oklahoma. Even though there weren’t a lot of people there to hear that song — if it was played — Brendon didn’t want to be associated with Trump’s campaign. “You’re not invited. Stop playing my song. No thanks, Brendon Urie, Panic! At The Disco & company.”

“Dear Everyone Else,” he added. “Donald Trump represents nothing we stand for. The highest hope we have is voting this monster out in November. Please do your part.” He then linked to HeadCount, a site that encourages voter registration and volunteering. With that, fans can now count Brendon/P!ATD among the numerous artists who have demanded Trump stop playing their music at his events. 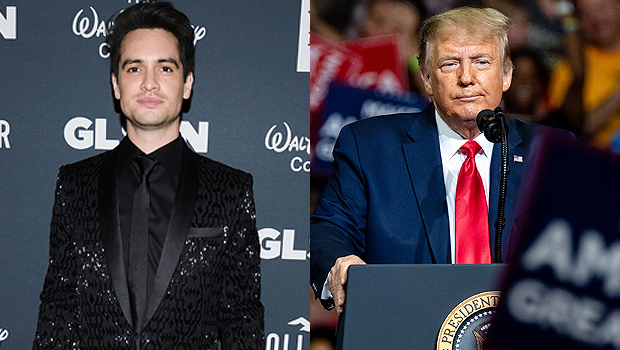 The family of the late Tom Petty was also furious at Trump’s June 20 rally. During the Tulsa event, the Trump camp played “I Won’t Back Down,” prompting Petty’s daughters Adria and Annakim, his widow Dana, and ex-wife Jane Petty to condemn this action. “Trump was no way authorized to use this song to further a campaign that leaves too many Americans and common sense behind,” the family said in a Twitter statement. “Tom wrote this song for the underdog, for the common man, and for EVERYONE….We believe in America and believe in democracy. But Donald Trump is not representing the noble ideas of either.”

“Concurrently, we have issued an official cease and desist notice to the Trump campaign,” ended the statement. Since Donald Trump allegedly has an issue when it comes to consent, it’s likely Tom and Brendon won’t be the last musicians whose music is played at a Trump rally without their permission. Neil Young was the first musician to blast Trump for his playlist, criticizing the then-candidate Trump for using “Rockin’ in the Free World” during his official presidential campaign announcement. Since then, Rihanna issued a cease-and-desist after she learned her music was used during his rally, per Insider.

R.E.M. also issued a cease-and-desist notice after Trump began playing “It’s The End Of The World As We Know It.” Guns N’ Roses’ frontman Axl Rose let Donald have it after he found out they were playing his music at events.  The Rolling Stones have issued multiple statements demanding Trump stop using “You Can’t Always Get What You Want” at his events. Queen, Pharrell Williams, The O’Jays, George Harrison’s estate, and Earth, Wind & Fire have also criticized Trump for using their music.