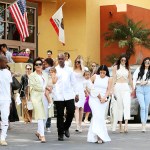 Kris Jenner shared a Father’s Day tribute to the dad’s in her life — but fans were quick to point out that Caitlyn Jenner was noticeably missing from the post.

UPDATE: 06/21/20, 12.50PM: After Kris Jenner received backlash for posting a Father’s Day tribute and leaving out her ex Caitlyn, the Kardashian matriarch reposted the image, with an additional pic showing Cait and her daughters Kendall and Kylie.

ORIGINAL: Kris Jenner is celebrating all of the fathers in her life today — from her late husband Robert Kardashian to her son-in-laws, but one person was curiously missing from her Instagram post. “Where is Caitlyn?” fans were quick to ask in the comments section of her pic. The June 21 collage featured photos of Kanye West with his four kids, Tristan Thompson with daughter True, Travis Scott with little Stormi, Scott Disick with his three mini-me’s, son Rob with his daughter Dream, and a snap of the late Robert with his four children.

Noticeably missing was 70-year-old Cait, who is the father to Kris’ daughters Kendall and Kylie Jenner. “Kris what about Caitlyn? Y’all really need to reconcile bcos life is really short,” one fan commented, while another wrote “2 of ur daughters daddy is missing….” Kris captioned the collage, “Happy Father’s Day to all the dads, stepdads, soon-to-be dads, grandfathers and father figures out there. How blessed we all are to have these incredible fathers in our lives! Thank you for teaching, loving and supporting our kids and grandkids and leading by example. We love you!”

This isn’t the first time Caitlyn has been snubbed by her family. While filming the UK version of I’m A Celebrity…Get Me Out Of Here, the show coordinated contestants to receive care packages and letters from loved ones to read on the air. However, Caitlyn didn’t receive a message from any of her six children including Kylie and Kendall Jenner — or her former step-kids Kourtney, Kim, Khloe and Rob Kardashian— and fans were outraged!

“Very sad to see  @Caitlyn_Jenner not receiving a letter from her children again. Watching everyone else reading their letters from family must have broken her heart. Lucky she received one from her partner,” fan @KATLIFE12345 tweeted, referencing a note from Caitlyn’s close friend Sophia Hutchins, 22. “where dafuq was @Caitlyn_Jenner
family? Should be ashamed #kardashianappeal,” @Alibal9973 wrote, adding “Totally lost respect for kardashian jenner family in their treatment aka lack of support to @Caitlyn_Jenner.”