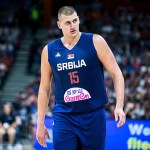 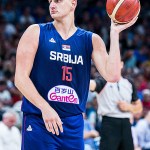 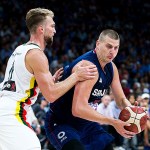 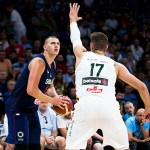 NBA fans seriously couldn’t believe their eyes when they saw a new video of Denver Nuggets star Nikola Jokic looking incredibly slim. Is that really him?

Three months have passed since the NBA suspended its season due to coronavirus concerns, and Denver Nuggets star Nikola Jokic apparently took that time off to become a whole new man. NBA fans were shocked to see a video of the Serbian power forward, 25, hanging out on the court with his teammates, looking much slimmer than he did before the break. In fact, he’s practically unrecognizable.

If you can’t tell, Nikola is the handsome dude in the olive bomber jacket in the video above. At the beginning of last season Nikola weighed in at 284. His Denver Nuggets teammates and front office have teased recently that Nikola would be in incredible shape when the league returns in July. Nuggets president Tim Connelly told ESPN recently, “[Nikola] sent me a picture. No shirt on. He’s got abs. I’ve never seen him have abs before.”

Needless to say, Denver Nuggets fans are seriously impressed with the work that Nikola has put in. They piled on the compliments on Twitter after seeing the video. “National media thought Murray and everyone on the team were exaggerating when they said dude has abs now lol,” one incredulous fan laughed. “Two months without american food,” another joked. “Got sick of the fat jokes real quick,” a fan theorized.

It’s unclear how much weight the NBA star has lost, but a subsequent tweet from sports reporter Bojan Brezovac says “Jokic at minus 20 kg” — that’s 44 pounds down for Nikola, who stands at 7 feet tall. Will Nikola’s new and improved physique help him on the court? He’s already an incredible player. The Denver Nuggets were 43-22 when the season paused in March 2020, partly thanks to Nikola’s 20.2 points, 10.2 rebounds and 6.9 assists per game. Prior to the break, the Nuggets were in third place in the Western Conference.