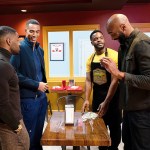 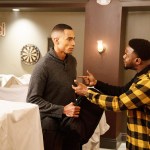 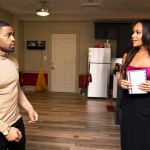 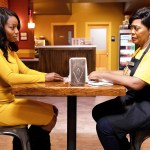 Barry Brewer is one of the ‘bruhs’ on Tyler Perry’s newest comedy series ‘Bruh.’ He spoke with HL about bonding with his co-stars, working alongside Tyler Perry, and more.

Tyler Perry’s Bruh debuted in May 2020 on BET+ and follows 4 college friends in their 30s as they navigate the world of relationships, careers, and friendships. Barry Brewer stars as John, a businessman looking to take the next step and get his bar up and running. The journey hasn’t been easy for John so far, but his ambition continues to push him forward.

HollywoodLife talked EXCLUSIVELY with Barry about why he was drawn to the character of John. For Barry, he saw a lot of himself in John. He also discussed bonding with his co-stars and establishing real-life friendships with them over the course of filming. Barry opened up about working with creator, executive producer, and director Tyler Perry and getting the opportunity to show off his many talents with this role.

What stood about the role of John in Bruh?
Barry Brewer: We have some similarities in a way. I feel like John thinks he’s the underdog. Growing up, I felt that way. He’s trying to prove himself to everybody instead of just looking more inside to see what is him. I think that’s what definitely draws me to that character. He’s layered and has a lot going on. I love the character because it’s a challenge to just show the different layers from his relationship with his mom to his friends and him trying to see where he fits in. They went to college and they were friends, but now they’re starting to evolve into their careers and things like that. He’s still trying to find what’s John. What do I represent? I love that as an actor. I love taking on that complexity and finding yourself in that character.

The show centers around a group of male friends and the chemistry between the 4 of you is essential to making this work. What was it like meeting each other and forming that bond and establishing the vibe?
Barry Brewer: That was the greatest part of the whole project, to be honest with you. Me and Monti [Washington], who plays Bill, did another show together called Games People Play, so we connected outside of the show on that. We were on the same wavelength just as it relates to life and our chemistry there. In the audition room, for whatever reason, me, Mahdi [Cocci], and Phil [Mullings Jr.] kind of connected as well just kind of coming back and forth to the audition. Mahdi and Phil were both from Atlanta and had to fly to LA to audition. We kind of just started talking a lot in the audition room. It’s ironic or divine, I should say, that we all got it. Working with them when it came to being on set, to playing friends, we actually were really friends. We kind of met early on and practiced together. We enjoy each other’s company outside of working through the script. The real friendships actually developed, and I think that comes across on the show. It was really fun. I don’t have a lot of friends, so developing real friendships with these guys who I was blessed to work with was pretty dope for me.

Things have been a little tense for John when it comes to the bar. What can you tease about where that goes from here?
Barry Brewer: It really reveals more of the characters and who they are at their core. I think it’s just like real life. Sometimes in troubling and hard moments, you really see who people are, whether that be good or bad. I think that this will really reveal who not only John is, but who Tom and Bill and Mike are in these controversial situations. I’m looking forward to the audience seeing more of the characters and who they are as the story builds.

One major aspect of John’s storyline is his relationship with his mother. Will we see more of that?
Barry Brewer: Definitely. We’ll peel back the layers of why the relationship is what it is. There’s obviously some creativeness about her character, but that character is real. She’s kind of that mom who has raised her son by herself and they’ve become friends. She’s had that tough love, straightforward mentality. We have 24 episodes, so you’ll see how that groomed John to be who he is.

I feel like John just wants to prove himself to his mom.
Barry Brewer: I think that’s the biggest thing for him. She’s the first one that he feels like he needs to prove to because he doesn’t have a woman in his life at this point.

This show is part of the expanding Tyler Perry universe. What’s it been like working with him and collaborating on this project that explores young Black men in the millennial age?
Barry Brewer: First of all, working with him was such an honor and a pleasure. To see a Black man have a movie studio is inspirational. To see something that represents me gives me inspiration. We wrote him a card and said, “Thank you for believing in your dreams so that mine may come true.” It was a pleasure to see and work with him in his element. He’s definitely a brilliant man and very generous in giving newer actors an opportunity where people wouldn’t have gotten the opportunity. Not just that, but he even allows us to do what we’re gifted at. I’m a stand-up comedian as well, so he allowed me a lot of leeways to create content. He gave me the blueprint, and let me run with it. For me, that was just one of the most impressive things. As an actor and stand-up comic, I admire so many people like Eddie Murphy and Martin Lawrence, so I’ve just been waiting anxiously for my chance to be able to do it my way and to have that creative opportunity to do that. Being an African American man, you don’t often see us with these careers on TV. Obviously, this is a group of people that could be any color, any race, creed or anything, but as a young African American man watching TV and movies and being into it, you don’t often see where they’re just regular guys who aspire to be a lawyer or a doctor or architect, so I really am grateful for that to be seen. I’m very grateful to be a part of a show where every color and creed can look at this and find their friends.