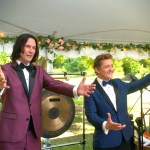 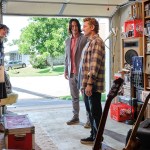 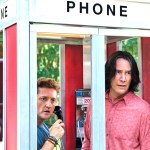 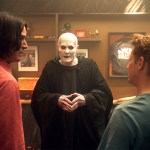 Bill and Ted are back for round 3! Keanu Reeves and Alex Winter reprise their iconic roles in ‘Bill & Ted Face The Music,’ and the first trailer is totally rad.

Happy Bill and Ted day, everyone! It’s been nearly 30 years since Bill and Ted last graced our screens. The wait for more of this dynamic duo has been long, but it will be worth it. The time-traveling exploits of William “Bill” S. Preston Esq. (Alex Winter) and Theodore “Ted” Logan (Keanu Reeves) continues in Bill & Ted Face The Music, which is set to be released on Aug. 21, 2020.

“Twenty-five years ago, you played a concert in front of the entire world,” Holland Taylor’s character says to Bill and Ted in the trailer. “One month ago, you played in Barso, California, for 40 people, most of whom were there for $2 taco night. Bill and Ted, what have you got to say for yourselves?”

“Be excellent to each other,” Bill says. Ted adds, “And party on dudes.” This duo was “supposed to unite the world and save reality as we know it.” They’ve been trying to write the song that will reunite the world, and they haven’t been successful. Ted brings up the idea of going to the future when they’ve already written the song.

When they meet their future selves, Bill and Ted come face-to-face with beefed-up meatheads in prison. Ted has a massive beard, while Bill is completely bald. Present-day Bill and Ted are shocked to see what they eventually become, to say the least.

Keanu and Alex made the exciting announcement about the third movie back in March 2019. “It is all because of you guys, so we owe you a huge debt of gratitude and we wanted to say thank you,” Alex said in the video. He also added, “And be excellent.” The very first Bill & Ted movie was released in 1989 and became an instant cult classic. The movie was followed by a sequel, Bill & Ted’s Bogus Journey, in 1991 and additional spinoffs, an animated series, live-action TV series, video games, and more.