Though the United States is in the process of reopening (with certain states, some public health experts have said, doing so too soon), the COVID-19 pandemic is still going on. Yes, thousands are flocking to the streets to protest systemic racism and police brutality, but it’s not like coronavirus decided to take a break. For those who’ve forgotten that we need to take precautions, KT Tunstall has teamed up with 4-time UK beatboxing champion Grace Savage and producer The Freelance Hellraiser for “Wash Ya Hands.”

Made on laptops while isolated under quarantine, “Wash Ya Hands” sees KT give helpful advice on how we can continue the flatten the curve when it comes to coronavirus. This funky and quite funny tack also aims to raise money for the War Child UK & WaterAid charities. All proceeds from the song’s sale will benefit those organizations in their COVID-19 efforts.

“Lockdown has been strange and challenging for all of us,” KT says in a statement. “I haven’t found it easy to sit and make new music. However, “Wash Ya Hands” was a flash of inspiration to write something fun to dance to. The whole thing was done on our laptops during the lockdown. The song is about how we move forward from this situation, whilst giving fans, friends, and families a chance to involve themselves in making the final video – which I can’t wait to see come together!” 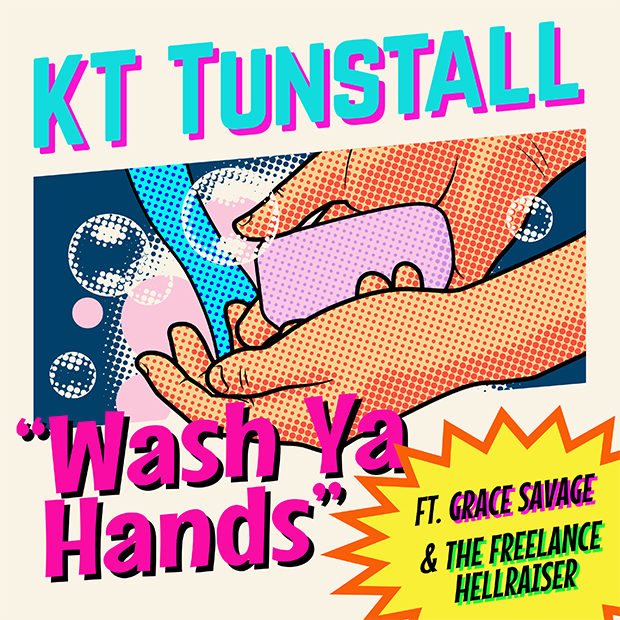 The corresponding lyric video also includes instructions on how fans can be part of this “KT Collaboration.” After fans purchase the song, KT wants them to record themselves “dancing, playing, singing, dressing up, in your undies, in the bath, WHATEVER YOU WANT’ along to a 20-section portion of the track. Fans can submit their videos and on June 26, the official music video will be released.

KT is best known Eye to the Telescope, the 2004 debut album that not only launched her career but made her a critical and commercial superstar. The album earned her a nomination for the Mercury Music Prize, won her the Best British Female Artist at the 2006 Brit Awards. It also scored her a nomination for the Best Female Pop Vocal Performance Grammy Award with “Black Horse and the Cherry Tree.” Since then, KT has released five more albums, had her music featured on everything from The Devil Wears Prada to Grey’s Anatomy to the 2008 presidential campaign of Hillary Clinton. She was also in that viral celebrity fight video all your cool friends shared online. Recently, she announced that she’s working on the third and final album in the KIN trilogy. The two previous installments – KIN and WAX – were released in 2016 and 2018.