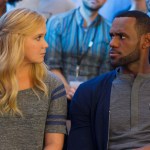 “But it’s when we’re given no chance that we somehow found that list bit of strength to keep fighting,” LeBron continued in his motivational and uplifting message. “And then we did when no one thought we could — not even ourselves. We came back from the impossible, from being broken. We found a way when it seemed hopeless. We came back when we should have been long forgotten. And we did it time and time again,” he said, as the camera flashed to some of the athlete’s most memorable wins.

The basketball star then tied his poignant message back to the global pandemic, which affects each and every one of us. “Right now, we’re fighting for something much bigger than a win or championship,” LeBron said over an image of a closed playground. “But if we learned anything from sports, it’s that no matter how far down we may be, we are never too far down to come back,” he concluded.

LeBron took to both Twitter and Instagram to share the newly released ad on Saturday, May 24, writing, “Nothing Can Stop US!!!!” along with crown, rocket, and arm flexing emojis. Nike’s official accounts also shared the incredible 90 second video, adding, “No matter what we’re up against, we are never too far down to come back,” and the hashtag “#YouCantStopUs.”

The Ohio native has been an advocate and voice throughout the pandemic, leveraging the LeBron James Family Foundation to host the Graduate Together special on May 16. The event served to honor high school graduates across the country, along with inspiring commencement speeches from Barack Obama, Malala Yousafzai and LeBron himself.