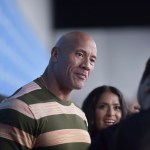 ‘The Titan Games’ returns for season 2 on May 25, and HollywoodLife has an EXCLUSIVE preview of Dwayne ‘The Rock’ Johnson revealing what’s ahead on the epic competition series.

“Everybody comes here because they want to be part of something that helps people get better. I love that,” Dwayne Johnson says in this EXCLUSIVE preview of The Titan Games season 2. That’s exactly what’s happening here. The Titan Games is kicking things up to a whole new level in the second season. “We wanted to create a scenario where we still had your everyday people from all walks of life who were exceptional athletes, but now they have the ability to compete against some of the greatest athletes in the world,” Dwayne explains.

“If any competitor is able to defeat one of my Titans, they’ll take their place and fight to defend their crown against new competitors,” Dwayne continues. At the end of the season, a female Titan Champion and a male Titan Champion will be crowned. They’ll each win a grand prize of $100,000. If one of the professional athletes wins, their prize money will go to a charity of their choosing.

“It’s going to be fun, it’s going to be entertaining, and quite frankly there’s nothing like it on TV,” Dwayne adds. You got that right. The Titan Games premieres May 25 at 8 p.m. on NBC.