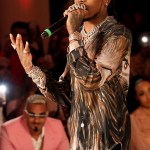 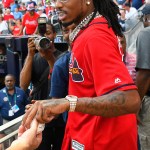 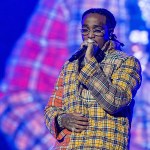 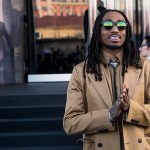 Before Quavo was a chart-topping rapper, he was a star high school football quarterback. The 29-year-old Migos member (real name Quavious Marshall) ultimately chose his music dreams over academics, but he can now celebrate being both a Grammy-nominated hip hop artist and high school graduate! On May 21, Quavo revealed he earned his high school diploma and shared a set of high school graduation photos on Instagram [SEE HERE]. “Finally Can Say I Graduated High School Class Of QUARANTINE 2020,” Quavo announced under the photos, which showed him rocking a traditional blue gown and cap. It sounds like Quavo now wants to get his bachelor’s degree next, because he added, “We Lit [fire emoji] Now What College Should I Go To?”

To celebrate the special occasion, Quavo and the rest of Migos — Offset and Takeoff — dropped a new “smash” later that night: “Need It” featuring YoungBoy Never Broke Again. It was the perfect hype anthem to celebrate such an occasion! Quarantine hasn’t been slowing Migos’ new music rollout; the rap trio has released two other tracks, “Racks 2 Skinny” and “Taco Tuesday,” this past May. All these songs will be featured on the group’s long-awaited fourth album, Culture III.

Fans celebrated right alongside Quavo (well, through their screens), including Tory Lanez! @QuavoStuntin can’t believe u finished high school … I wish I would have got passed 10th grade,” the rapper tweeted. Even more stars chimed in under Quavo’s Instagram post, like Lil Yachty who wrote, “Happy for u bro congrats,” and Normani, who left a string of praise hands emojis.

It appears that Quavo earned his diploma from the same institution he attended before he became a music sensation: Berkmar High School in Lilburn, Georgia, which his cousin Offset (then known as Kiari Kendrell Cephus) also attended. “BERKMAR HIGH NAWFSIDE BABY,” Quavo added in his graduation post’s caption.