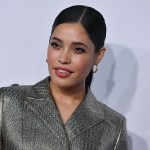 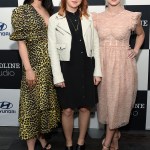 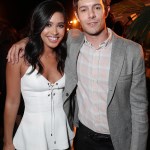 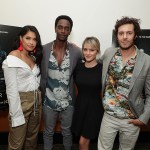 Clementine, which had its world premiere at the 2019 Tribeca Film Festival, is now in virtual cinemas everywhere. The film, written and directed by Lara Jean Gallagher, follows a heartbroken young woman named Karen who flees Los Angeles for her ex’s idyllic lake house in the Pacific Northwest. When she arrives, Karen meets a mysterious and alluring young woman named Lana. Karen stays at the lake house and becomes more tangled in Lana’s web. Through this journey, Karen is able to heal herself after a tough breakup. HollywoodLife talked with Otmara Marrero, who plays Karen, about her character’s evolution.

“I think it’s really interesting to see how it’s kind of like the seven stages of grief and how she handled it and the different dynamics,” Otmara told HollywoodLife. “I think it’s interesting how she started the relationship with no power. She was in a relationship with someone where she didn’t have her power. The person was older, and they were the income winner. Throughout the movie when she meets Lana, all of a sudden she has her power back. She sees that power dynamic and how it shifts back and forth. It’s a circle of healing. I started through heartbreak, and then I was healing through Lana, and I think Lana was going through me. It was really interesting. It felt really personal.”

The magic of Clementine relies heavily on the simmering chemistry between Otmara and Sydney Sweeney, who plays Lana. Otmara told HollywoodLife that not knowing each other was the secret to building Karen and Lana’s relationship. “I think something that happened accidentally that ended up working in our favor was that we didn’t know each other,” Otmara revealed. “When I was cast, I didn’t know who was cast as Lana. I don’t think they’d cast her yet. When we got to Oregon, I want to say she was filming something for Netflix, so she got there a little after me. We didn’t meet until our first day on set working together, which I want to say is the scene where she’s looking for her dog. I think that’s the first scene we actually met on set. It just ended up working because normally you have time with your scene partners to just talk. It’s like this thing that actors do. They get on set, and all of a sudden you feel like you know everything about them. Me and Sydney didn’t have that. We were building our friendship offset, and it just happened to work out. I guess it was like that thing of not knowing each other. But as soon as we got on set, we had so much chemistry. It was really, really natural and organic.”

In the end, Karen and Lana go their separate ways. Even though there isn’t a so-called “happy ending,” Otmara noted that Karen walked away from this experience a better person. “I think Lana was a big lesson for her, and I don’t think she’d be friends with Lana after this,” Otmara said. “It’s just not right. She’s way younger than she thought she was. Morally, it’s just not right. But I think that her being on the other side and her being the person in power in the relationship, I think that doesn’t always necessarily feel good. I think that her next relationship she can approach it from an even playing field. Nobody needs to be in power. But I think Lana was a huge lesson for her growth.”

The actress also opened up about working with Lara Jean on a project that was near and dear to the director’s heart. “It was so personal to her that it felt like you had to carry that,” Otmara told HollywoodLife. “It just became personal to me because it was so personal to her. She’s so incredible, and she’s so good with little details. Her attention to detail is impeccable. She’s so quiet and soft-spoken. She’s really, really magical to work with. You can just see it in the movie. I read the script in one sitting. Normally, I don’t read scripts before auditions because you don’t have a lot of time or you don’t get the script. I remember reading it in one sitting. For a long time, I didn’t even realize the relationship was with another woman. It was so magical from like the cracks on the wall to the greenery and the lake and just so many little details.”