Is there a good lesson behind every “bad” decision? Such a profound philosophical question is put against an irresistible dance beat in “bad idea,” the new song from Leah Kate, premiering here on HollywoodLife. “You drop me off in the darkness / we stand in my doorway / what are we doing?” ponders Leah on the song, eager to shed “all my fear” before inviting them in, even though she knows this person is a “bad idea.” The song itself is an enticing slice of synth-dance pop, and if Leah’s voice is the sound of temptation, how could anyone not give in?

In less than three minutes, “bad idea” establishes itself as the song that’ll play on on the radio during every late-night cab ride with a beautiful stranger, the soundtrack whenever someone chooses “dare” instead of “truth.” It’s the sound of taking a chance, even though the odds aren’t in your favor. No risk, no reward, right? This attitude is easily captured in the lyric video, shot by Leah herself (she taught herself all the skills needed to make the video while under quarantine. She’s been making use of the time by taking classes to help her creative work, which she does along with her brother — who helps produce her work.)

“When I wrote ‘bad idea,’ I was in the early stages of seeing someone and was having a real internal conflict about the whole situation,” Leah shares with HollywoodLife. “I knew it wasn’t the smartest choice to pursue this person, and I was worried it would end poorly given the nature of our relationship. Part of me thought that it would be better in the end if I did not proceed with it. Despite my mind telling me to do one thing (avoid the situation at all costs), my heart was telling me to do another – pursue him. I liked him! We all have imperfections and can have distorted thinking caused by love or desire, and that’s okay.”

“This internal conflict is real, it is normal, and it is something we all find ourselves needing to address at some point. Sometimes doing something that seems like a bad idea can be exhilarating and fun, and it ultimately helps us to learn about ourselves and grow. I want my listeners to feel a sense of comfort when they may be in a similar situation… to know that they’re not alone, and can bring a little light to the situation.”

Leah’s message is simple: don’t overthink things. While by no means does “bad idea” encourage listeners to live recklessly and put themselves in harm, Leah says the message behind the track is to be willing to put faith in your instinct. “I am a big advocate of following your gut and listening to your heart. Whether someone is making a choice about what job to take, what to say to someone, if they should move to another city or not, or a romantic situation like mine – this internal conflict extends beyond making bad choices with just lovers. Look for the light and the lesson when making any choice, and lean in when your gut tells you to. Living and learning is fun.” 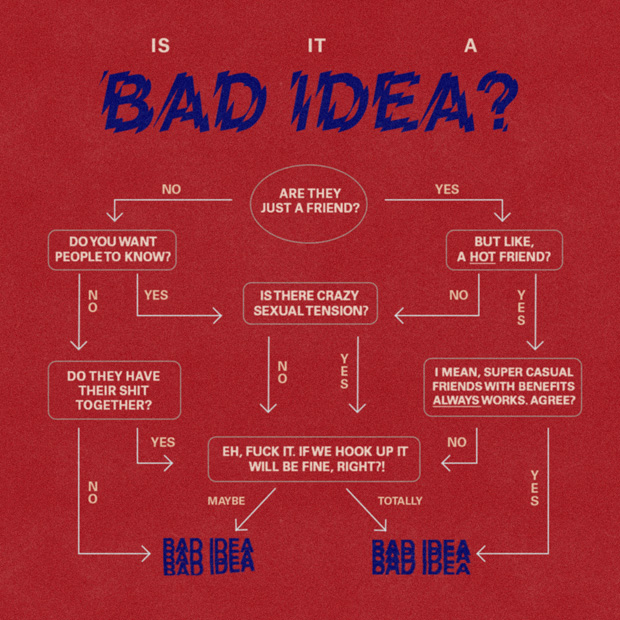 Born and raised in the City of Angels, Leah has lived and learned through her own “bad ideas” to the start of a successful music career. Her tracks have been featured on shows like The Bold Type and The Hills: New Beginnings. She has also appeared on your favorite Spotify playlist, including New Music Frida, Teen Party, Friday Cratediggers, Pop Rising, and Dance Rising.

So, what’s one of Leah’s “bad ideas” that turned out good? “The best example is my move to NYC,” she shares with HollywoodLife. “My parents didn’t want me to go, so they didn’t have the best things to say about it. Of course, all of my friends wanted me to stay, and everyone told me NYC sucks. My parents were like, ‘you’re on your own if you wanna do that…things are tough out there!’ I was so scared, but I just took a leap of faith and booked a one-way ticket and went for it. It was the best decision of my life. ”