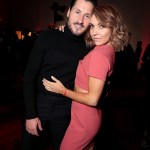 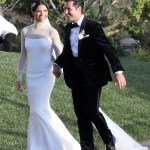 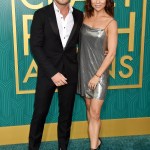 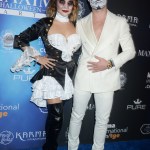 Val Chmerkovskiy has a whole new quarantine look! The dancer let his wife Jenna cut off his ponytail, and he revealed the haircut in a new video.

We’ve heard about girls cutting their own bangs while quarantined, now we have dancer Val Chmerkovskiy chopping his ponytail! The 34-year-old took to Instagram on April 21 to share a video of his wife Jenna Johnson giving him a total makeover! The Dancing With The Stars alum declared his wife, a fellow dancer, was giving him a “quarantine haircut”. In the video she nervously asks, “are you sure you want me to do this?” as she let out a laugh. A very shirtless Val showed off his various tattoos as he began the video with a mop of messy brunette curls.

Jenna, dressed in grey sweatpants and a black printed tee, swept her hair up into a ponytail and got to business. She first shaved the sides of his head, before pulling his long locks into a ponytail and chopping it right off! With less hair to deal with, she then shaved off the remaining tresses from the crown of his head. “I love my wife, so I let her give me a haircut. @jennajohnson,” he captioned the clip. “Let us know which videos you would like to see from us while we Quarantine!”

Fans were quick to comment on his new ‘do. “Looks amazing! She did so good!,” one follower wrote, while another answered his question about what content they want to see next, “You doing her hair and makeup.” Val and Jenna are seriously such a sweet couple, and the dancer gifted his wife with a massive diamond ring when he proposed on June 14, 2018. Jenna posted a photo of herself at the time, holding out her left hand and showing off her ring, while a beautiful Venice, Italy sunset served as the background.

I love my wife, so I let her give me a haircut.😝@jennajohnson Let us know which videos you would like to see from us while we Quarantine! . Tag someone you would trust to shave your head!! . #quarantine #quarantinelife #quarantinecouple #couplegoals #shavehead #marriedlife #stayathome

“He put a ring on it 💍 #engaged,” she captioned the shot, and we love it! This ring display comes just hours after Val and Jenna both announced that he proposed to her at a restaurant in Venice. It looks as though this was a shot taken later that night, since Jenna is wearing the same outfit as when Val proposed to her. The announcement came in the form of the photo, showing Val down on one knee as Jenna gasped. Too cute!