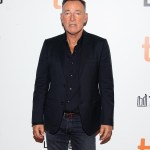 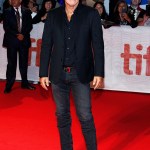 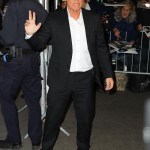 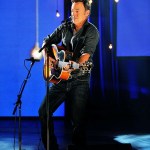 Fans relived the ‘Glory Days’ when Bruce Springsteen strummed on his acoustic guitar with his bandmate and wife, Patti Scialfa, to open the JERSEY 4 JERSEY benefit show!

Bruce Springsteen and his wife, fellow rock legend Patti Scialfa, were born in the U.S.A. — but more specifically, New Jersey! So, the talented husband and wife duo of course had to help out their home state for its special JERSEY 4 JERSEY benefit show that aired on April 22. To help the concert raise funds for the New Jersey Pandemic Relief Fund, which will provide grants to communities in need amid the coronavirus pandemic, Bruce and Patti set up a concert right from their home. The lovers strapped on their acoustic guitars to perform a duet of “Land of Hope and Dreams,” which Bruce and their band, The E Street Band, released in 2001 (yes — Bruce and Patti are bandmates).

The touching performance served as the perfect opener for the virtual show! Following more acts, Bruce and Patti later returned to the screen (following an introduction from Chris Rock) to perform their band’s other song, “Jersey Girl.” Nothing is more comforting than listening to Bruce and Patti harmonize as they sing “Sha la la” together.

Bruce calls Long Branch his hometown, while Patti was raised in the town of Deal. Later in their lives, the couple lived in a mansion in the state’s town of Rumson, where Bruce and Patti raised their children Evan, 29, Jessica, 28, and Sam, 26. Bruce sold the lavish pad for $3.4 million in 2017, but still owns a home and house farm in Colts Neck (another town in NJ).