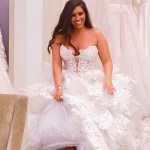 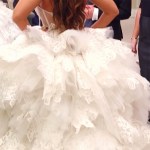 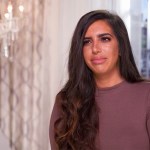 In this EXCLUSIVE preview of the all-new ‘Say Yes To The Dress: Atlanta,’ a set of bridesmaids are not happy when the bride wants them to wear a two-piece outfit and look like ‘mermaids’ on her wedding day.

The bride and her bridesmaids don’t see eye-to-eye when it comes to bridesmaids dresses. The bride is going for a “casual yet chic” vibe and her colors are emerald green and gold. But that’s now how the bridesmaids see it. “She wants us to be naked,” a bridesmaid says in this EXCLUSIVE preview of the April 11 episode of Say Yes To The Dress: Atlanta. This bride isn’t going for the typical bridesmaid look.

The bride wants them in tiny tube tops and midriff-baring high-waisted skirts! Needless to say, the bridesmaids have “all of the concerns” about this look. They are not fans of this wild idea at all. “Death to whenever sent her that idea. Death to you,” bridesmaid Latonnsya says.

Fellow bridesmaid Stephanie adds, “Only one of the bridesmaids has a flat stomach so us wearing tube tops and high-waisted skirts with our midriffs showing is a no. We’re going to look like a busted can of biscuits.” The bride starts to compromise and says they don’t have to wear tube tops. But she says she still wants a two-piece because it’s “different.” At least the bridesmaids are getting somewhere with her.

“I’m going to listen but just know when it comes down to it, the choice is mine,” the bride says. She leaves the room to let them pick out their dresses but gives them seashells before she walks away to remind them of her beachy wedding vibe. The new season of Say Yes To The Dress: Atlanta airs Saturdays at 8 p.m. on TLC.