Don’t expect a Lost reunion anytime soon. Maggie Grace expressed her concern about the way Evangeline Lilly is handling the ongoing COVID-19 pandemic. She posted a lengthy reply under her Lost co-star’s recent Instagram post — which included that she and her kids were going about their lives “business as usual,”opting not to self-quarantine — which sparked major backlash.

“There’s no need to panic, but at the same time this is about all of us – the vulnerable, the immunocompromised, older folks,” Maggie, 36, wrote. “Sure, it’s a free country, but how about choosing to exercise some of that wonderful freedom to have some compassion, trust the extensive science here and not overwhelm health system.”

She continued: “No doctor should have to choose which patients get life saving care and which patients get sent home to die – the sort of triage that is tragically happening in Italy right now. Think about how these small decisions effect [sic] your dad and those in your community as ventilators run out.”

The Fear the Walking Dead star then encouraged the Canadian actress, 40, to “rethink” her decision not to stay at home during this global health crisis.

“You kids will be fine without gymnastics, I promise :). Be well,” she wrote. “PS Daniel said he is doing a lot better btw,” Maggie added. “I don’t know, Maybe you guys want to chat?” 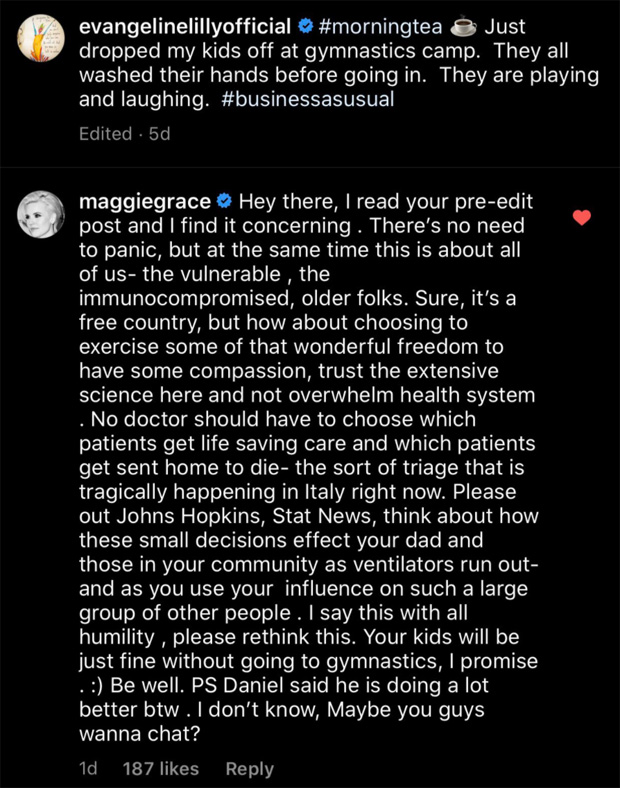 Daniel Dae Kim, 51, confirmed he tested positive for coronavirus in a video on Instagram on March 19. In good news, just two days later, the actor, who’s been keeping fans updated about his diagnosis, revealed he is recovering and feeling much better on March 21.

“I am happy to report that my progress has continued and I feel practically back to normal. I am lucky to be in the 80 percent of diagnosed cases that have not required hospitalization, that’s an important statistic,” he said via an Instagram video. “I’ve pretty much been staying in bed, taking my medication, but as of now I have no symptoms other than a little residual congestion which should clear of very soon.”

Lilly came under fire from a post she shared on Instagram in mid-March, which explained her choice not to self-quarantine.

“I have two young kids. Some people value their lives over freedom, some people value freedom over their lives,” she wrote after dropping  her kids off at gymnastics after they washed their hands. “We all make our choices,” she said. Lilly also noted in a comment to a fan that she lives with her father, who has stage four leukemia.