Nina Dobrev prepped for a game night presumably at her LA home on Monday night. The Vampire Diaries actress, 31, was spotted in her driveway after a shopping trip, in which she wore a mask to protect herself from coronavirus. She was pictured carrying a Game of Thrones Monopoly board game out of her Tesla, along with a black duffle bag.

Nina rocked Splendid’s Fernwood Active Jogger set, a tee and comfy pants, in pink with a pair of flat black ankle boots. The Fam star, who wore a long key necklace, donned a pair of circular sunnies and a transparent medical mask with a white strap. She wore her brown hair down and appeared to be makeup free for her day of shopping.

Nina was photographed outside her LA home just one day after she and Olympic gold medalist, Shaun White were spotted riding bikes together in Malibu. The pair dressed casually for their Sunday outdoors were joined by Nina’s dog, Maverick. Shaun, 33, held the pup in his left arm as they cycled alongside each other. 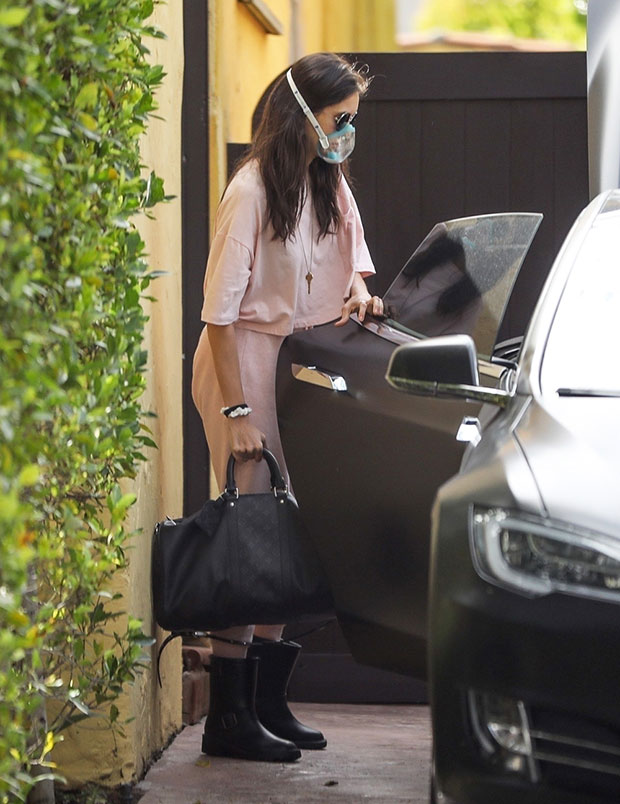 It’s unclear if Nina and Shaun’s bike ride was platonic or a date, as that was the first time the rumored couple were spotted out together. They have not yet addressed the romance buzz.

Nina split from her screenwriter-director boyfriend Grant Mellon in November 2019 after dating for more than a year. Shaun was in a relationship with the lead singer of the band Phantogram, Sarah Barthel, 37. It’s unclear when and if they broke up, however, the two were last photographed together in April 2019, according to Sarah’s Instagram.