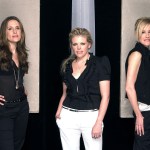 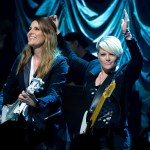 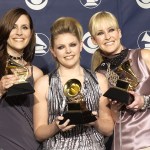 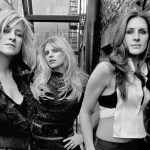 The Dixie Chicks are back! The group just dropped ‘Gaslighter,’ a song and video that seemingly blasts singer Natalie Maines’ ex-husband, while also slamming all the ‘deniers’ and ‘big-timers’ out there.

It’s been 14 years since the Dixie Chicks – Natalie Maines, Martie Maguire, and Emily Robison – released their Grammy-winning seventh album, Taking The Long Way. Since then, the “controversial” trio has pursued solo albums, started side projects, and raised families, all while staying relatively out of the spotlight. Save for a guest appearance on a Taylor Swift song, there hasn’t been any new Dixie Chicks music – until now. They just released “Gaslighter,” the title track of their upcoming album, on March 4, and clearly, the wait was worth it.

“We moved to California and followed your dreams,” sings Natalie. “I believed the promises you made to me / Swore that night ’till death do us part / But you lie-lie-lie-lie-lied.” Though the lyrics seemingly reference her divorce from actor Adrian Pasdar, “Gaslighter” has a universal reach. Just ask any woman who has been gaslit by her boss, her husband, or her family. The video is also just as catchy, utilizing military imagery, a contortionist, and the Dixie Chicks’ trademark harmonies.

The band, along with producer Jack Antonoff, announced in June 2019 that they were working on a new album and that it would arrive “someday.” Over half-a-year-later, the album was ready, and Natalie Maines teased a clip of the song on Instagram and Twitter. The group also shared the definition of “Gaslighter,” saying it’s a “psychological manipulator who seeks to sow seeds of doubt in a targeted individual or members of a group, making them question their own memory, perception or sanity.” Natalie also reveal how in 2005, she “witnessed Harvey Weinstein aggressively berate the two female directors of our documentary Shut Up And Sing. I sat there in stunned silence. It’s something I’ll always regret and will never repeat.”

It appears that instead of shy away from the political stance that made them pariahs in the country music world, the Dixie Chicks are embracing the role of being firebrands. In 2003, the Dixie Chicks voiced opposition to then-President George W. Bush’s decision to invade Iraq in 2003. “Just so you know, we’re on the good side with y’all. We do not want this war, this violence, and we’re ashamed that the President of the United States is from Texas,” Natalie said during a London concert in 2003, comments that seem so quaint and inoffensive compared to the toxicity flowing out of the White House (and online.)

Following the remarks, country music radio stations enacted Dixie Chick bans. There were protests, boycotts and death threats, but the Dixie Chicks soldiered on. They released Taking the Long Way in 2006, with singles “Not Ready to Make Nice” and “Everybody Knows.” Though largely ignored by country music radio, the album won big at the 49th Grammy awards. It won all five categories it was nominated in, including Song of the Year, Record of the Year, and Album of the Year. Following the release of their documentary, the band went on hiatus. Natalie released a solo album, while Martie and Emily started Court Yard Hounds.

They returned to radio in 2019, courtesy of Taylor Swift. The Dixie Chicks providing backing vocals on her song “Soon You’ll Get Better.” The song prompted angry calls from listeners, according to Rolling Stone, but country stations were seemingly testing the waters for a potential Dixie Chicks comeback. Whether or not “Gaslighter” gets airplay remains to be seen. They didn’t get the warmest reception when they performed alongside Beyonce in 2016.