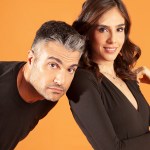 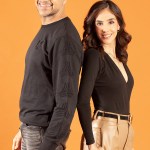 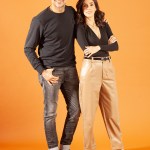 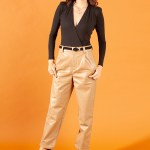 Jaime Camil and Sandra Echeverría team up in the rom-com ‘Las Píldoras de Mi Novio’ (My Boyfriend’s Meds) and spoke with HL EXCLUSIVELY about touching on mental health issues, a possible sequel, and more.

Las Píldoras de Mi Novio (My Boyfriend’s Meds) is the perfect romantic-comedy to watch to warm you up during these cold winter months. The movie stars Jaime Camil and Sandra Echeverría as Hank and Jess. Hank is a charismatic mattress store owner who falls for Jess, a marketing executive. Hank and Jess’s connection is instant and they fall into a whirlwind romance. They end up going on vacation to an island resort and Hank forgets to bring the prescription medicine he takes for his multiple disorders. The vacation takes a turn and their relationship is tested in a major way.

This isn’t the first time that Jaime and Sandra have worked together, but it is the first time they’ve starred in a live-action movie together. Jaime and Sandra voiced characters featured in a soap opera in the animated movie The Secret Life of Pets. After Jaime signed on to play Hank, he called Sandra to offer her the role of Jess. After reading the script, Sandra was in. The co-stars opened up about why their roles in the rom-coms stood out to them.

“For me, I think it was the fact that it was a very funny movie. I love doing physical comedy, but then you realize that you’re going to touch a very sensitive subject with mental health issues,” Jaime told HollywoodLife. “I didn’t want Hank to be an empty barrel or shallow. I wanted him to have some depth. I did all the research, I spoke with people who suffer from bipolarity and schizophrenia. I wanted them to share their experience with me. How would you feel when you had an episode? How is it living with this condition? Even though it’s a rom-com and it’s meant for people to laugh and have a wonderful time, I wanted people to know that mental health issues are no joke. We didn’t do this movie wanting to insult or be disrespectful to the conditions. But we wanted to use comedy as a very powerful and efficient tool to talk about these subjects openly.”

Sandra was “very excited” about taking on a comedy after having more dramatic roles. “It was so refreshing for me,” Sandra said. “I really had a lot of fun. The difficult part was to keep a straight face here. These guys were doing so much fun stuff.” In the movie, Sandra and Hank have effortless chemistry. Sandra raved over Jaime’s “amazing energy” and his ability to constantly make everyone laugh.

Las Píldoras de Mi Novio is just one of the many movies being released in the new wave of rom-coms. Sandra discussed why she thinks romantic-comedies are having a moment again. “I think people realize they need more stuff to just go watch and have fun and be happy,” she said. “There’s so much stress in our lives day by day and there’s so much craziness around the world that we just maybe have to bring some happiness to people. I love to watch romantic comedies because it really changes my mood. I feel inspired and motivated and in love.”

Since we’re living in the era of reboots, revivals, and sequels, Jaime revealed that he’s “contemplating a sequel” and he already has an “idea” of how to continue Hank and Jess’s love story. Bring it on!