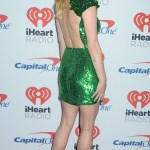 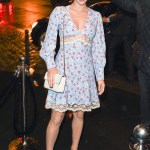 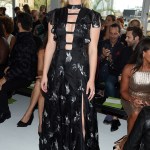 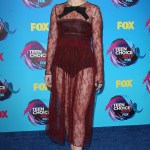 It’s been nearly a year since Luke Perry’s sudden passing following a stroke. His ‘Riverdale’ co-star Lili Reinhart says she had a dream about him, and that he’s ‘smiling brightly on the other side.’

The one year anniversary of actor Luke Perry‘s tragic and sudden passing is coming up on March 4. He’s still in the thoughts of his Riverdale co-stars, especially Lili Reinhart, 23. She shared with her fans via Twitter that he came to her in a dream, and that she thinks it was a sign that his spirit is smiling down on her. “I had a dream last night that I saw Luke…and I hugged him so hard and cried into his shoulder, telling him how much we all miss him,” Lili began her emotional tweet.

“Looking back on it this morning, I think his spirit was visiting me in my sleep, letting me know he’s smiling brightly on the other side,” she continued. Luke was just 52-years-old when on Feb. 27, 2019, he suffered a massive stroke while at home in Sherman Oaks, CA. He was rushed to the hospital where he was sedated, but he never recovered from the complications. Luke passed away five days later.

Fans sent Lili their love with comforting comments under her post. User a-t told her, “He’s definitely with you guys,” while fan aly wrote, “my heart. i know he’s so proud of you lili.” User kt, shared, “Sending you love i know it’s hard to lose someone you love,” and fan fateshobi wrote, “i miss him so much. his memory will never be forgotten.”

I had a dream last night that I saw Luke… and I hugged him so hard and cried into his shoulder, telling him how much we all miss him.

Looking back on it this morning, I think his spirit was visiting me in my sleep, letting me know he’s smiling brightly on the other side ✨

Luke played Archie’s father, Fred Andrews on the CW show. The season 4 premiere of Riverdale, which aired on Oct. 9, 2019, served as an emotional tribute to Luke. Archie got word that his father was struck and killed by a car. He later visited the site of the accident and found a woman lying flowers on the side of the road. She was played by Shannen Doherty, Luke’s Beverly Hills 90210 love interest, in a touching cameo. It turned out that she was a stranded motorist and Fred came over to help her when he was stuck. At the end of the episode, the town put on a parade in Fred’s honor, and video and photos of both Luke and his character Fred were shown.