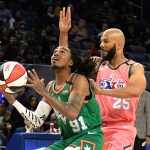 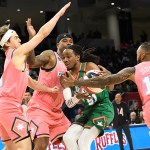 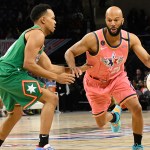 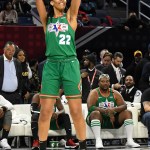 To kick off the NBA All-Star Weekend, stars like Chance The Rapper, Famous Los, and Bad Bunny hit the court to celebrate Kobe Bryant with the All-Star Celebrity game, so check out all the highlights from the bash.

Every year, some of the biggest stars from music, movies, television, and sports get to live out their basketball dreams with the NBA All-Star Celebrity Game presented by Ruffles. Sadly, the 2020 edition of the star-studded extravaganza came less than a month after the tragic death of Kobe Bryant. However, instead of letting their sadness consume them, stars like Quavo, LaRoyce Hawkins, Bad Bunny, Hannibal Buress, Jidenna, Katelyn Ohashi, Ronnie 2k and more used the Feb. 14 event as a way to celebrate Kobe’s life and legacy.

Before the tip-off, there was a tribute to Lakers legend Kobe Bryant, who was killed in a helicopter crash at age 41 on Jan. 26, 2020. Also remembered was former longtime NBA Commissioner David Stern, who died  at 77 on Jan. 1, 2020 after suffering a brain hemorrhage a few weeks prior. The tribute was to “Two men who forever changed the NBA and the game of basketball in a way only legends could. They will forever be missed but certainly never forgotten. Thank you David and Kobe. “In what was supposed to be a moment of silence, fans began chanting “kobe, kobe,” over and over again. During halftime, there was a powerful video montage of Kobe’s greatest moments at past NBA All-Star games.

The real winner though was the Special Olympics. The NBA All-Star Game is not just a chance for rappers to feel like ballers, and for your favorite comedians to go one-on-one with Olympians, television stars, and the like. It’s also a way to raise money for a good cause. This year, Ruffles – the Official Chip of the NBA – rolled out “THE RIDGE.” For the entire game, players shot from the 4-point line. For every shot made from “THE RIDGE,” Ruffles would donate $4,000 to the Special Olympics (with a minimum donation of $40,000.)

This game kicked off the NBA All-Star Weekend, which has become a Kobe Bryant memorial/celebration in the wake of his tragic death on Jan. 26. Kobe – along with his 13-year-old daughter Gianna and seven others – perished in a helicopter accident in Calabasas, California. Since then, the tributes to the Los Angeles Lakers icon have been nonstop, and the NBA All-Star Game immediately became a way for the game of basketball to honor Kobe. The two teams will wear jerseys bearing either number 24 (for Kobe) or number 2 (for Gianna.) The format of the game was also modified to honor Bryant.