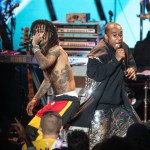 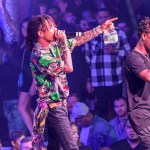 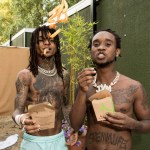 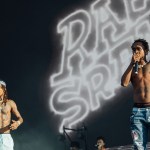 Swae Lee, one of the voices behind Rae Sremmurd, teamed up with fashion legend Giuseppe Zanotti for a new shoe line, and Swae shares EXCLUSIVELY with us how, with this collab, he wanted to create something revolutionary

“Miami is the perfect place to flex,” said Swae Lee during the Jan. 31 launch of his collaboration with Giuseppe Zanotti, according to Footwear News. During Super Bowl weekend, the Rae Sremmurd rapper took to Saks Fifth Avenue in Miami to roll out his new shoe line. The gorgeous, gender-neutral collection — featuring canvas boots, suede loafers and sneakers, floral motifs, glitter, detailed embroidery, and a new “GZ” logo – effortlessly melded Swae’s swagger with Giuseppe’s style, something that Lee tells HollywoodLife was intentional. “With this collection, we want the fashion and music worlds to collide,” Swae said in an EXCLUSIVE interview conducted over email.

“We need to be able to move in fashion, from one side to another side,” Zanotti said, per Footwear News. “I like to experiment with the new generation of artists, and this is the first time I’m doing something dressy with a young male artist.” This marks the second major collaboration between Zanotti and Swae. He and Slim Jxmmi, the other half of Rae Sremmurd, helped launch the fashion icon’s “Blabber” sneaker in 2019. Swae tells HollywoodLife how Giuseppe got his style, the one aspect of the collection that speaks to himself, and how the goal of the line was to create something “which doesn’t have one class. Something that anybody from any different world can wear.”

HollywoodLife: You and Jxmmi worked before with Giuseppe Zanotti to help launch the Blabber sneaker. Now, you have your own shoe with him. What was your first impression of him? Did you immediately know that this was a guy who got your creative vibe?

Swae Lee:  HE IS IN-TUNE WITH THE PEOPLE. HE KNOWS WHAT’S GOING ON IN THE CULTURE. HE REACHED OUT TO ME BECAUSE I AM ONE OF THE GUYS PUSHING MUSIC FORWARD RIGHT NOW. WITH THIS COLLECTION, WE WANT THE FASHION AND MUSIC WORLDS TO COLLIDE.

You’ve once pointed out that shoes – along with the right outfit – makes a big statement. What would you recommend that someone wears with your Giuseppe x Swae Lee to make the most significant statement?

I WOULD WEAR THE LOW-TOPS WITH A PAIR OF JEANS, A BUTTON-DOWN T, AND SOME COOL SPECS. I AM SURE IT WOULD TURN A LOT OF HEADS.

What’s your favorite part of the collection? Just the fact that there’s a shoe out there that ultimately reflects you and your fearlessness?

I LIKE THE FLOWER ELEMENT. FLOWERS MEAN GROWTH, DEVELOPMENT, AND BLOSSOMING.

You’ve been referred to as someone who pushes the fashion envelope. Our sister site, Footwear News, noted that you wore a pair of Giuseppe Zanotti stacked-heel booties from your new collaboration when attending the 2020 Grammys. Were you intentionally trying to evolve men’s fashion with this collection?

WITH THIS COLLECTION, I WANTED TO CREATE SOMETHING WHICH DOESN’T HAVE ONE CLASS. SOMETHING THAT ANYBODY FROM ANY DIFFERENT WORLD CAN WEAR.

The limited-edition collection is now on sale.