Jameela Jamil, 33, has been an outspoken advocate for body positivity for years. Her I Weigh campaign, launched two years ago, has rapidly gained traction and now boasts one million followers on Instagram. And it turns out one of her many fans is none other than Taylor Swift, 30. While promoting her Netflix documentary, Miss Americana, Taylor praised Jameela for “the way she speaks about body image”.  HollywoodLife sat down for an EXCLUSIVE chat with Jameela during a Zumba Fitness event to get her reaction to Taylor’s praise and recent eating disorder admission.

“I was just very sad to know that she’s been going through that her whole life,” Jameela told HL, “but I was very glad for my words to have been something that helped her and I really thank her for using every press opportunity she’s had to highlight my work because we don’t know each other.”

“She doesn’t have to highlight my work. She could easily say she came up with these things on our own, but for her to highlight the I-Weigh movement is incredibly cool of her. I’m just so grateful that she’s talking out about her own experience, because it can help lots of her young followers identify their own eating issues that they have, I think it’s really important. She’s also so smart in how she calls things out so clearly and makes them so obvious to the rest of us. So I’m really grateful for all of her work.”

In an effort to promote self-care Jameela has joined forces with Zumba Fitness, the world’s largest dance-fitness brand, to empower and encourage everyone to “Be SELFish” and take time out of their busy days to focus on self-care — without apologizing for it. During the carnival-themed Zumba Fitness event, in Los Angeles on Feb. 4, Jameela jumped into a Zumba class with over 60 event attendees. Here’s why she loves the popular dance based exercise so much. 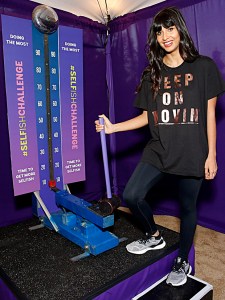 “I like any movement that encourages exercise in the name of fun and not vanity,” Jameela told HL, “and I feel like they’re really doing that with Zumba. And I also particularly like this campaign for the selfish challenge because I think selfish gets a bad rep and we’ve stigmatized it too much. I think in particular for women, we deserve to be a little bit more selfish in this world. We need it and it’s good for us to take time out for ourselves and do things like dancing and looking after our mental health, which inherently makes us stronger for everyone else anyway, so it benefits us to look after ourselves properly.

“I’m not big on exercising and this year was the year that I have told everyone that this is the year that I’m going to start exercising for my mental health. Until now I didn’t because I associated it with vanity and that, as a former eating disorder sufferer, triggered me. So I haven’t been a big exerciser until now and I was like, 2020, it’s a new decade. I’m going to start doing this for me, for my mental health and not make this at all about weight loss.

“[Zumba has] mental health benefits like the clear head, I think it’s fun. I think it’s a community activity. I think that the music is just loud and you get lost in it, and it’s fun music. I think that you get literal happy chemicals released in your brain. You’re full of endorphins when you leave and you’re sweating and that’s good for you, and it’s not about calories, it’s just about fun.”