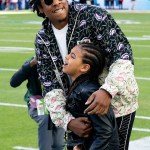 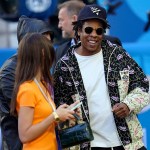 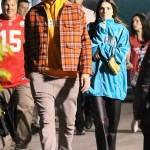 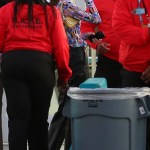 The stars are out and about in Miami for Super Bowl 54! See all of the celebs who made their way to the Super Bowl!

Whether they’re San Francisco 49ers fans, Kansas City Chiefs fans or just there for J.Lo and Shakira’s epic halftime show, so many stars are out at Super Bowl 54! Beyonce, JAY Z and their daughter, Blue Ivy, were early arrivers to the game, taking the field in super stylish looks. JAY was hugging his daughter ahead of the big game while Bey looked on from the VIP section. Alex Rodriguez was also on the field along with Jennifer Lopez’s kids, clearly supporting the star before her major halftime performance. Emily Ratajkowski and her husband Sebastian tossed around the football, while DJ Khaled arrived in a custom Super Bowl 54 jacket.

The celebs are at the big game after a full dew days of celebrating at epic pre-Super Bowl parties. Michael Rubin’s Fanatics Super Bowl Party at the Mondrian South Beach Hotel included epic performances by Migos, The Chainsmokers, Swizz Beatz, Meek Mill and Post Malone. Harry Styles and Lizzo gave a surprise performance at the Sirius XM and then they dominate the Pepsi Zero Sugar Super Bowl Party at the Meridian.

Of course, a major moment at tonight’s game that everyone’s looking forward to is Jennifer Lopez & Shakira’s halftime performance! Ahead of the evening, the pair were seen rehearsing in Miami’s Hard Rock Stadium, with J.Lo running through her hits “Jenny From the Block,” “Waiting for Tonight,” “Let’s Get Loud,” and her track featuring Pit Bull, “On The Floor.” Shakira’s jams included “Waka Waka (This Time for Africa),” “She Wolf,” “Whenever, Wherever” and “Hips Don’t Lie.” At a press conference ahead of the game, Jennifer and Shakira both promised an “empowering” halftime performance that also will pay tribute to the late Kobe Bryant. “We have to love people when they’re here and not wait,” Jennifer said. “I think about Vanessa as a mom and losing her best friend and partner and losing her child, you know, how awful that must be for her right now, and I just wanted to send the message and praying God guides her through every moment because she has three more babies to take care of.”

Shakira added, “I think we’ll all be remembering Kobe on Sunday. And we’ll be celebrating life and celebrating diversity in this country. I’m sure he’ll be very proud to see the message that we’re going to try to convey onstage.”