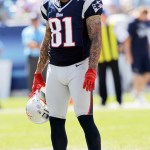 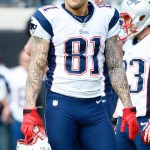 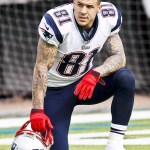 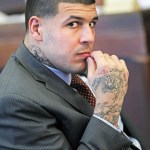 On ‘GMA,’ Shayanna Jenkins broke down in tears as she finally responded to the bisexuality rumors discussed in the new Netflix documentary, ‘Killer Inside: The Mind of Aaron Hernandez.’

Shayanna Jenkins, 30, is continuing to stand by her late fiancé’s side. She showed nothing but acceptance while addressing rumors of Aaron Hernandez’s bisexuality, her first time ever doing so after his sexual orientation was speculated about in the Netflix docuseries  Killer Inside: The Mind of Aaron Hernandez, which was released on Jan. 15. “If he did feel that way, or if he felt the urge, I wish that I was told,” Shayanna said through tears in a sneak peek of her interview on Good Morning America, which airs on Jan. 29. She added, “I wish he would have told me because I would not have loved him any differently. I would have understood.”

Shayanna doesn’t just feel that way because Aaron was her fiancé and the father of their seven-year-old daughter, Avielle Janelle Jenkins-Hernandez. “[Bisexuality is] not shameful and I don’t think anybody should feel shameful on who they are inside, regardless of who they love,” Shayanna continued. “I think it’s a beautiful thing. I just wish I was able to tell him that.”

In the new docuseries, Dennis Sansoucie, who played football with Aaron at Connecticut’s Bristol Central High School, claimed they had “an on-and-off relationship from the 7th grade to the junior year of high school.” This isn’t the first time, though, that Shayanna has reacted to rumors of Aaron’s bisexuality. In May of 2017 — the month after the former New England Patriots player committed suicide in his prison cell — she went on Dr. Phil to say, “I had no indication or feeling that he was such…I don’t know where this came from. It’s embarrassing, and it’s hurtful. Regardless if it’s true or not, it’s just not something that I saw. It’s not something that I believe. It’s just not him.”

Ever since Aaron was found guilty of the 2013 murder of his friend and Shayanna’s sister’s fiancé, Odin Lloyd, Shayanna continued to support Aaron, even though he was handed a life sentence in prison in 2015. On top of that, Aaron had even been indicted on murder charges in 2014 for the double homicide of immigrants Daniel Jorge Correia de Abreu and Safiro Teixeira Furtado, but was later found not guilty of their deaths.