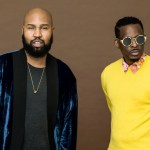 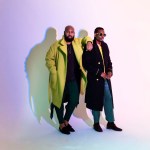 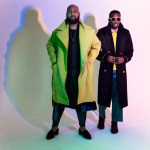 “Music is birthed out of pain,” Claude Kelly said in an exclusive interview with HollywoodLife, while discussing the creation of the duo Louis York that he formed with longtime collaborator Chuck Harmony. “It was birthed out of our depression, our frustration, our wanting to inspire people and get connected to people again.” Chuck and Claude are both award winning producers and songwriters, who have worked with music giants like Whitney Houston, Christina Aguilera, Jennifer Lopez, Rihanna, Britney Spears and Ariana Grande. However, both men eventually began to feel downtrodden and uninspired with the work they were doing, specifically because of the competitive and political nature of the industry.

“I confided in him, and he confided in me that he wasn’t inspired anymore. So we were actually confessing to each other that we were going to quit music. That was about five months ago,” Chuck recalled. “I think that was a moment when you were able to hear someone you respected really say something that sounded totally crazy to you. And so we were like mirrors for each other, and that was what spurred Louis York,” Claude continued. The two men were “both trying to save each other,” they said. “I was not thinking about myself. I was like, ‘Chuck cannot quit the business,’ and I think we was thinking the same thing for me,'” Claude said.

The duo was formed and has since found major success, being named a part of iHeartRadio’s “On The Verge” program, getting radio play across the country and even forming a friendship with none other than Kathie Lee Gifford! “She’s our neighbor and a really good friend in Franklin, Tennessee,” Chuck said of Kathie. “We became good friends and we wrote this beautiful body of work. It’s called “Oratorio,” which is 27 minute oratory, which is like a mini musical, with real songs tucked in between. It’s the spiritual journey about the realistic stories of what happened in the New Testament and it’s all recorded now with the Nashville Orchestra.”

Louis York will also perform at the Grand Ole Opry on February 7, after they were a big hit when performing with Jimmie Allen a few months ago. “Do you know how big of a deal that is to be doing that?” Claude asked, rhetorically. “For two black men to be doing that? That’s crazy.”

Be sure to stream Louis York’s album American Griots — The Album!