After making a name for herself in the world of J-Pop, Che’Nelle is ready to take over the US – and beyond! And she’s doing it with a ‘sassy, fun and flirty’ song that’ll make you hand over your heart to her.

You have to hand it to Che’Nelle – there’s really no one else like her. Born in Malaysia, raised in Australia, and a mega-superstar in Japan, the international singer is ready for her moment in the U.S., and she won’t take “no” for an answer. She released “Hand It Over” last week, an infectious bop that energized with, as she tells HollywoodLife, a “sassy,” “fun,” and “flirty” energy that takes over your body from the opening beats. A collaboration with Grammy Award-winning producers The Stereotypes, “Hand It Over” is an electric first impression for those who have yet to fall in love with this songstress.

The song also represents a huge shift in Che’Nelle’s career. After signing her first major record deal in the early 2000s, she was catapulted to superstardom. Songs like “Believe,” “Baby I Love You,” and “Happiness” made her a household name in Asia. By 2017, she had eleven albums on the International market, three of which went Gold in Japan, and two other being certified Platinum. Yet, in 2017, she faced a choice: sign a new deal and continue her success as a J-Pop star or take full control of her career. She opted for the latter, and as she tells HollywoodLife, it was a “risk.” Considering the undeniable groove of “Hand It Over,” her bet may very well pay off

Che’Nelle chatted with HollywoodLife over email about the new song, working with The Stereotypes, her fan’s reaction to her new sound, and what her supporters can expect in the next year.

HollywoodLife: “Hand It Over” starts off with some acoustic strumming, and while the beat gets pumping, the song keeps it on a spot where it seems like you could rock this with a live band. Was that the vibe you were going for – a dance banger that could rock both the club and the dive bar?

Che’Nelle: Oh, for sure!  I love the mixture of both track production and live instruments, I can definitely see it playing in either of those venues for sure!

You worked with The Stereotypes on “Hand It Over.” How was that experience? As an always-evolving artist, did you pick up on any of their tricks (or, since you’ve been a superstar for over a decade, did they pick up on any of yours?)

Hahaha, I have no idea if they picked up on any of mine, but I did have a great experience doing this track with them. They were super chill and easy to work with, there was a very cohesive and energetic flow between them, myself, and my writing partner, we felt very in sync. I can’t say I picked up anything specific, I just remember appreciating the vibe and the way the sessions happened.

What inspired the lyrics behind it? It’s this striking anthem of asserting power, and it’s got some bold, seductive lines of “I run shit around here,” “I’m the master,” “you’ve got something of mine, and I’m coming for it.”

Hahaha. There is some super sassy stuff in there, hahaha! It’s all fun and flirty, I honestly was freestyling to the beat and “hand it over” came out and so we built the song like,…. “mmmm what could that mean?” Because of how the beat was and the vibe was, “hand it over” meant whatever it is you have I want — time, love, money, sex, friendship, valuables, etc. You’re gonna want to give it to me because I have it handled, a super playful song. 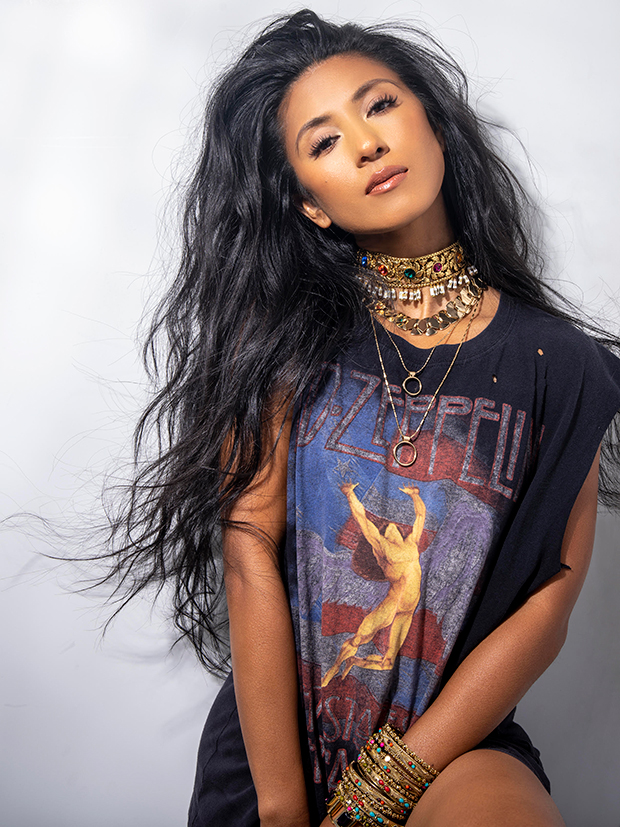 You’re a singer who was born in Malaysian, raised in Australia, found success in Japan, and rediscovered her sound in Los Angeles. Do you think this multi-faceted career has given you a unique perspective on life and music? Or has juggling all these different elements been kinda crazy at sometimes? Or both?

Def both, I’ve learned that every country is its own world. Plenty of things are hard to explain unless you are actually there yourself to experience it. Business-wise, culture, language, social environment are all crazy different, and I feel completely blessed to have had that experience so far and right now. I’m also experiencing something new again, and it’s all exciting and scary at the same time.

Having first found success in Japan with 2007’s “I Fell In Love With The DJ,” you’ve had an incredible career in Japan, resulting in you being dubbed a J-Pop icon. Have your fans supported this new direction you’ve taken with your sound?

I wish I could give you this answer, but I really have no idea yet, but we are about to find out! Haha!  I have incredible fans across the world, and I’m excited for them to hear new material, all I can say is if it’s good music. it’s hard not to support, right? :)

You said that your Calm Before The Storm release was “a real risk” since it required you to decide if you wanted to continue your career in J-Pop or take your sound in a different direction. The result was, as you said in an interview, a sound that “was authentic to me.” Does this new song continue that journey of authenticity?

It does continue that journey, yes. My sound is of many, and as time goes by, the more I create, I get to mold into what is personal and authentic to me. That was def a risk, and I hope that this journey continues to show me I made the right choice.

Of course! There’s no stopping haha more music for sure, and one of my major goals is to tour, so I’m putting that out there in the universe!