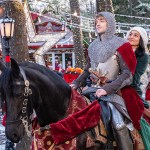 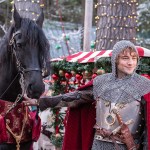 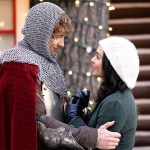 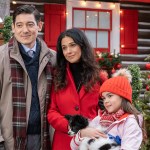 The credits scene for ‘The Knight Before the Christmas’ left the door wide open for a sequel featuring Sir Geoffrey. HL spoke EXCLUSIVELY with Harry Jarvis about the possibility of another movie.

The Netflix Christmas movie universe continues to expand and there is still more story left to tell when it comes to The Knight Before Christmas. After Sir Cole and Brooke got their happily ever after, the credits started to roll. As the credits continued, we were transported back to 14th century England. Sir Geoffrey comes out of the castle celebrating with friends. He comes face-to-face with the magical Old Crone who helped Sir Cole find Brooke. “You truly are a handsome knight. Pray you help one as beauteous as myself,” the Old Crone tells him. When Sir Geoffrey is pulled away by a friend, he decides to stay behind to help with whatever she needs. He stares into the glowing red necklace she has on and that’s where it ends. Give us the sequel, Netflix!

HollywoodLife talked with Harry Jarvis about what’s going on with the potential sequel and he said he would “absolutely” do another movie. “I don’t know what’s going to go on with Netflix but if there is a second film where Sir Geoffrey is involved and I get to spend more time with Josh [Whitehouse] and Vanessa [Hudgens] that would be great,” Harry told HollywoodLife. Harry also revealed his ideas for what he’d like to see in a possible sequel.

“I personally would like to see an integration between a romance and a bit more of action movie potentially,” Harry said. “If you do decide to come back to the 14th century or even if you have a couple of knights traveling forward, there’s that potential to include a little bit more action. Maybe I just want a sword fight. Maybe that’s all I want.” He wouldn’t mind a sequel taking place in the 14th century. “I think that could be a lot of fun,” Harry continued. “They had quite a lot of the old Christmas traditions in 14th century England. I feel like that would be really fun to explore.”

While Netflix hasn’t confirmed a sequel as of yet, Harry still has a lot going on at the moment as he heads into the new year. “I’ve actually been doing a lot of writing so I’ve been pitching a couple projects at the moment. I’ve got promotion on a horror film coming out called The Dare, a Shakespeare film called A Midsummer Night’s Dream, and an indie horror film called Cassette.” We’ll be seeing a lot of Harry in 2020! The Knight Before Christmas is currently streaming on Netflix.