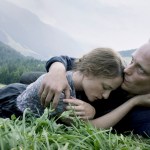 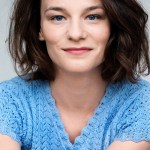 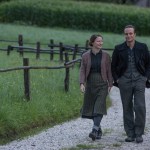 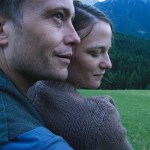 Franz and Fani Jägerstätter were simple Austrian farmers but when the Nazis invaded their country, the real life couple chose to follow their principles instead of Hitler. Valerie Pachner explains why she had to play Fani .

Imagine being willing to leave your beautiful wife and three adorable young daughters and give up your life rather than serve in Hitler’s army?

Imagine having such deeply felt principles that you can’t ignore your conscience to do what is right, even if it means being ostracized by virtually everyone in your town. These were the moral choices made by Austrian farmer, Franz Jägerstätter (August Diehl) , and his wife Franziska Schwaringer or Fani (Valerie Pachner) in real life during World War II. Now legendary director, Terrence Malick, has told their courageous story in a spellbinding new film A HIDDEN LIFE, which has just opened in theaters.

There are very few people, history has shown, who have the moral courage to defy evil and refuse to take part in it even as crowds are swept up in its allure. This is why A HIDDEN LIFE is so fascinating. What made a quiet young farmer with everything to live for, chose execution over serving as a medical orderly in Hitler’s army? And what made his lovely, devoted wife stand by him even though it meant enduring a life of harshness and loneliness.

“They believed in good and not destruction…they shared something that was so much the opposite of what Hitler and the Nazi regime was. They were about kindness and tolerance and love,” Austrian actress, Valerie Pachner, 32, who portrays Franz’s devoted wife, Fani, told HollywoodLife in an exclusive interview. She was attracted to the role of Fani because she was “portraying a woman who knows and feels what is right and follows that even though it means to sacrifice a lot or everything.”

Malick’s film brilliantly pulls viewers into the at first idyllic life of Franz and Fani, who are deeply in love and true partners in working their farm and raising their sweet daughters. The director contrasts the beauty of the lush fields, the vast Austrian alps and expansive skies in the background against the small minds of the villagers who became caught up in the cult of Hitler.

Franz and Fani want nothing more than to work hard and appreciate the beauty of their surroundings, their children and God’s love. But being a conscientious objector in the Nazi Reich was not an option, Franz learned. Not even the Catholic church offered he or Fani support. Nevertheless, Franz refused to abandon his principles and Fani supported him. “She herself knew that what she was doing was right. And this just gives you so much strength and if you feel that yourself, you can suffer injustice without breaking. That’s what was interesting to me,” explained Pachner.

The film was shot in Austria, including in the town and in the very farmhouse owned by Jägerstätter. Fani herself lived in the same area into her 90s and never remarried. Her daughters, now in their 80s, are still alive and Valerie met them and talked with them. They have recollections of their father, who died in 1943 at the age of 36. “It almost feels like for them, it’s a personal trauma but they’re also carrying the whole history of it and you can feel the whole weight of the historical context weighing on them, not just the personal pain,” says Valerie.

Their father was considered a traitor during the war and even after the Nazis were defeated, Pachner reveals that Franz’s reputation didn’t begin to be resuscitated until the 1970s and he was finally beatified in October 2007 by the Catholic Church.

Pachner, who lives in Berlin now, hopes that A HIDDEN LIFE can open up a conversation about preventing another totalitarian dictator like Hitler and a hate-filled murderous regime. She says it breaks her heart to know Franz and Fani’s daughters and to see them “witness far right extreme tendencies rise again.” “It makes me want to shout and scream that this can’t be,” she admits. “It makes me realize how important it is to never forget and how important it is right now to look back to that time again, to see where this can go, and to start a conversation about that.”

She believes the film will have a positive impact in her native country of Austria. “I feel like if you watched the film, I think you cannot not feel empathetic with what (Franz and Fani) have gone through. I think it will have an impact on people in a deeply personal way, which is always, in the end, what’s important.”

A HIDDEN LIFE is in currently in theaters. Check out listings to find a screening near you.