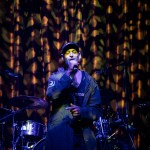 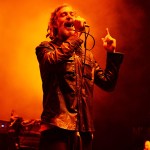 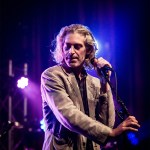 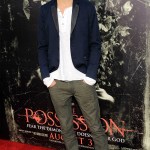 Before the world becomes illuminated by the ‘Festival of Light,’ singer Matisyahu chats with us about his annual holiday concert, feeling like ‘the other’ during Christmas time, and the lack of ‘awesome’ Hanukkah songs out there.

The last night of Hanukkah falls on Dec. 29, and just like the eighth candle on the menorah, things will get lit at Brooklyn Steel. After the sun sets, Matisyahu will bring his long-running Festival Of Light to New York City. This year, the event features performances from the “King Without A Crown” singer, tour mates Bedouin Soundclash, Brooklyn’s Your Old Droog, as well as other special guests. It will be a wonderful conclusion to Hanukkah, a show that Matisyahu, who spoke with HollywoodLife while on tour, predicts will be spiritually powerful. “Double power[ful],” in fact.

Matisyahu has put many miles under his wheels since blowing up in 2005. Dubbed “the world’s first Hasidic Jewish reggae star,” the man born Matthew Paul Miller found success with the certified-gold concert album, Live at Stubb’s. The follow-ups — 2006’s Grammy-nominated Youth and 2009’s Light — produced three of his biggest hits: “Youth,” “King Without A Crown, and “One Day” (the latter being used in everything from NBC’s Countdown to the 2010 Olympics to NBA 2k10.)

Having built an identity as the “Chassidic reggae superstar,” Matis shockingly shed it in 2011 by shedding his hair. His decision to shave his beard caused a stir online, with many assuming he had parted ways with his faith. Quite the opposite, as he said, the act was a way for him to submit to “a higher level of religiosity.” Hitting up a Supercuts on the Upper West Side was part of his spiritual evolution, a change that would also reflect in his music. 2012’s Spark Seeker “fully embraces the electro-sheen that started to find its way into [his work],” according to Tablet, while 2017’s Undercurrent was born out of jam-band improvisation sessions.

This isn’t to say that Matis has left reggae behind (his 2018 collaboration with Jamaican singer Movado proves it, and the genre still paints the corners of his songs.) It’s more that his music, like Matis, is on a journey, an expedition in search of a higher spiritual truth.

On the eve of a new decade, the journey will find Matis under the glow of a giant disco ball dreidel in Brooklyn. Before this massive show, Matis talked with HollywoodLife about the show, how the Christmas season makes him feel like a stranger in his own country, and what the future holds for him.

HollywoodLife: This year marks the 13th installment of your Festival of Light concert. When you first started it, did you imagine it would become such a long-running tradition?

Matisyahu: It’s cool because [Mattathias] Mattityahu he’s the figure from the Hanukkah story. And Judah Maccabee, his son Judah. But the first show that I ever remember fans showing up to was a Hanukkah show, and it was in Brooklyn. And it was at a place called Southpaw. And my managers had just told me — I was in shiva at the time, and they just said, “Show up at this time.” And I remember walking up and there was a line around the door, and I was literally thinking, “Who the hell is … who are these people here for?” And that was a Hanukkah show. So I always had a good feeling for Hanukkah. And then, I think that next year, we started the Festival of Light. And we’ve continued it.

We have the only massive disco ball dreidel that I’m aware of. And it looks really beautiful when the lights hit it. It’s pretty awesome.

Oh, you still have it? There were pictures from the show three years ago.

It literally lives in my garage, and every year it comes out for its appearance.

This year, the Festival Of Light takes place on the eighth night of Hanukkah. Does the show take on a special meaning when this happens?

Oh no, I like that actually. I honestly didn’t even think of that, but there is something special to it being on the eighth night. Yeah, definitely. Like a double power. I like that.

Being that it’s the final night of Hanukkah, is there something special that you do to correspond with this year’s Festival of Light?

Well, there isn’t typically anything specific, but in the Kabbalah, like in the mystical principles there, the feeling is that the eighth night is the strongest night. Because it’s like, you’re adding up to that, you’re building up to that. And that’s the climactic moment with the most light. So certainly like that night, coming out at kind of Hanukkah, and it’s going to be powerful. I think it’s going to be a powerful night.

Especially with this year’s lineup. Your Old Droog is on the bill.

Yeah! We worked together on a song for his new project, which is unbelievable. I think it’s going to blow people away. I mean, he’s such a great rapper. He’s really creative, and just he’s really unique. And he has a Jewish background. He’s a Ukrainian Jew, his parents are from the Ukraine. He was interested in doing something that was connecting with his tradition and history. So we linked up it’s going to culminate with the release of our song, which we’ll play with lots for the first time live at the Festival of Light.

And Bedouin Soundclash is also playing?

Yeah. And they’re out on tour with us now. The Festival of Light is actually the last show of the tour that we’re on. And they’re a great band also out of Canada. They’ve got a great sound. And we have a nice comradery with them out here.

While doing some research, you tweeted something in 2012. You asked your “Christian brothers and sisters” if they “actually enjoy these [Christmas] songs.”

Oh, wow. Yeah. I remember that.

? for all my Christian brothers and sisters. Do you actually enjoy these songs? Do they bring up fond memories of family and childhood?…

You’re on tour and traveling around the country. Around this time of year, Christmas music is ubiquitous. Do you wish that there was more Hanukkah music thrown in the mix?

It was funny. Me and my wife were in the mall yesterday. We were eating in the mall and the music was playing. And I noticed the speakers and I was like, “Wow, those are pretty big speakers. There’s a lot of them.” And the music. We were going like, “Oh, man, this f-cking music.” And then she said, “Well, why isn’t there more Hanukkah songs?” I said, “As a Jew, it’s really the one time of the year that you realize it’s a Christian country that we live in.” And that’s okay.

For me, that’s fine. I’m not putting a judgment on it. But it’s like as a secular Jew, it’s easy to kind of like just fall into white America or whatever. And Christmas time is the one time that you actually as a Jew get to feel kind of like “the other” in America. You realize that “oh yeah, we have something slightly different than what the American tradition is.” So that’s that.

And then in terms of the music itself, it’s funny. I think it’s so bad. We go to the malls, and everywhere we go, it’s playing. To me, it’s not that it’s Christmas music. It just seems like every artist, even the artists that aren’t that bad, but usually, the bad artists are putting out Christmas albums. So, it’s like doubly bad. But even the good artists are putting out bad music on Christmas, it seems like.

I just haven’t heard many great songs that I enjoy when we’re out there and shopping. Some of them are annoying. But whatever.

The good ones you aren’t usually played at malls.

Yeah. There you go.

Would you want this sense or feeling of being “the other” in the country to go away?

Actually, when I first became religious, I remember wearing a yarmulke in public on the subway for the first time and getting that feeling in a big way. It felt even more drastic probably than it was. But I loved it. I loved that feeling. And that became a big part of my looking for an identity at some point.

So, it’s okay that they’re not playing Atom & His Package’s “What We Do On Christmas” at the mall?

Yeah. I mean, if we had a huge wellspring of awesome spiritual Jewish music out there, I would say, “Oh yeah, play some.” But there really isn’t any. I don’t think there’s much, certainly not Hanukkah songs. The Adam Sandler song, we all love that one. And other than that, people have tried. I actually like my Hanukkah songs. I have one called “Miracle” and “Happy Hanukkah.” They’re kind of pop-y. But they’re fun. I like them. That’s my contribution. I hope to make another good Hanukkah song at some point. But yeah, there isn’t much out there. So, I can’t really complain.

Fans would love to get another Hanukkah song from you. In fact, will we get more music from you in 2020?

Yes, absolutely. I’m working on things now and will continue to work on them. We’ll have some new music in 2020, I’m sure.

While you’d want to keep it under wraps – because surprises are amazing – but will this new music follow the improv/jam band/organic cultivation that birthed your last album, Undercurrent?

No. I’m probably going to go now in a different direction. I feel like every record that I’ve made has been like … the way I see it is as an opportunity to just do something different. For me, I really wanted to make that kind of record. And now I want to make some more songs that are … I don’t want to say more pop-y, but more-

Yeah. More … yeah, that would be a good way to say it. More structured. More like anthemic songs. And then I want to make more reggae, kind of reggae bangers like that Mavado song. And then to me, the live experiences, the opportunity that I always get to be improvisational and explore the music.

Right now, out on the road, we’re exploring the music. When I come back off the road, it’s like, “all right, so now which direction do I really want to go?” I’ll try out some different things. I’ll work with some different producers and some different genres, different styles and see what feels good. And then at the same time, probably write with my band as well. We’ll amass a bunch of music and lyrics and whatnot, and then figure out what it is that I want to release.

Matisyahu’s Festival Of Light takes place on Dec. 29 at Brooklyn Steel in Brooklyn, NY. Bedouin Soundclash, Your Old Droog, and a special guest are set to appear. Tickets are available now.