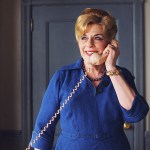 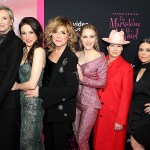 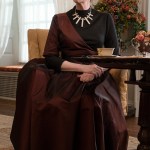 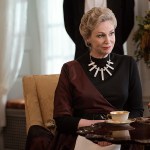 When Miriam ‘Midge’ Maisel broke the news at her family’s Passover dinner that she had secretly launched a career as a stand-up comedian, her mother-in-law, Shirley, was not on board, reveals the actress who plays her.

In real life, Caroline Aaron, who hails from Richmond, Virginia and was born in 1952, has little in common with her Marvelous Mrs. Maisel character, Midge Maisel’s mother-in-law, Shirley, circa 1958. “My estranged daughter-in-law [on the show] has this crazy idea that she’s going to be a comedian,” Aaron says in an exclusive interview with HollywoodLife before the debut of season 3 of The Marvelous Mrs. Maisel  today, December 6. “But Shirley thinks that it’s temporary, she’ll just get over it. I think that Shirley’s not so disapproving of what Midge is doing, she just thinks it’s kind of nutty and that she’ll come to her senses.”

Shirley Maisel, of course, is in a very traditional marriage to Moishe, the father of Midge’s estranged husband, Joel. And while she works in the family’s garment business, she very much defers to her husband’s needs and wishes. All of this is why Caroline says her character is “shocked” by Midge’s ambitions. “In that time period, the idea that a woman said that she was going to go off by herself in the world and tell jokes — it just seemed preposterous,” Caroline explains.

As for Shirley Maisel’s opinion about her son in the series, who cheats on Midge, played by Rachel Brosnahan, with his secretary, Penny Pann, and even moved in with her — she doesn’t blame him at all, insists Caroline. “He made a mistake,” Caroline says, explaining Shirley’s point of view. In fact, she believes that her character has turned a blind eye to her own husband’s cheating, too. “There was a very subtle line that Moishe, played by Kevin Pollak, said to his son, our Joel,” Caroline reveals. “At one point in a scene he told him, “I told you, girls like that are strictly for the side.” I remember, as a person, my heart broke in a sense. But I think that in the world that Shirley lives in, that goes on and you don’t see it, you put up the blinders. I have home and hearth and family. Whatever Moishe does on the side, I am not going to let that disrupt me and this sort of core foundation that I have. So I think to myself, if he had done it on the side, it would’ve been okay. But it’s not okay with Midge. And that’s the difference in our vocabularies as women, between Midge and Shirley.”

Despite Shirley’s point of view — that her estranged daughter-in-law is “crazy” — she “absolutely” wants Midge and Joel to get back together, insists Caroline, as she looks forward to Season 3. “It’s because of the children. Because I want to be all one family, I don’t want to share my grandchildren with somebody else. I want us all to be under one roof. If I could put my arms around everyone I love, I would. I think that’s the kind of character she is.”

Now, while Midge’s mother, Rose Weissman (Marin Hinkle), had a midlife crisis in Season 2 and ran off to Paris, Caroline doubts that Season 3 or others will reveal a re-awakening for Shirley Maisel. “She’s gotten everything she wanted. This American Dream…she’s part of the money. In a lot of ways she’s not just ornamental as Mrs. Weissman is. And so she’s used to having a voice.”

To check out what happens to Shirley, Midge and all of the other colorful characters checkout The Marvelous Mrs. Maisel, December 6, on Amazon Prime Video.