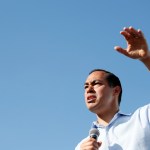 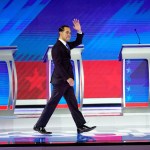 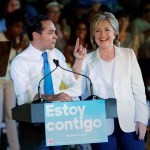 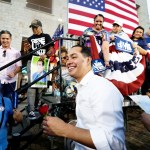 Democratic candidate Secretary Julian Castro wants primary voters to choose him to fight Donald Trump for the presidency. Here, he tells HollywoodLife readers why his vision for America is powerful and inclusive.

If Julian Castro is elected President of the US in 2020 he will ensure that every woman–whether “rich or poor, or wherever they live” in the country can “access good reproductive healthcare.” That’s a key Castro message to young women as he campaigns to earn the nomination as the Democratic candidate to fight Donald Trump in the 2020 election, next November 3rd. “Family planning and reproductive healthcare” are “human needs,” the former mayor of San Antonio tells HollywoodLife in an exclusive interview. “I believe every single person who needs reproductive healthcare should be able to get it as part of their regular healthcare plan.”

The former Secretary of Housing and Urban Development promises to restore federal funding for Planned Parenthood, which was blocked by Donald Trump‘s administration in February 2019. Team Trump barred all organizations that provide abortion referrals from receiving federal family planning dollars, even though no federal dollars had been used to pay for actual abortions at the clinics, for years. Planned Parenthood, which serves about 2.8 million women a year, including many college students and low income women–has since been forced to close clinics. Nationwide nearly 900 clinics have lost federal funding.

Instead, the Trump administration is now directing tax payer dollars (including yours) to religiously-based anti-abortion groups. “Planned Parenthood is an organization that does vital work in our country, and has been crucial to so many women’s lives, and not only with providing for abortion, but a number of other reproductive services,” Castro, 45, points out to HollywoodLife.

As for the nine states including Louisiana, Georgia, Alabama, Ohio, Wisconsin, which have passed laws virtually banning abortion in their states, Castro asserts that he will fight back. “Unfortunately, the right wing is making a full court press against reproductive rights in this country,” he says. “I will push back and protect reproductive rights at every single turn by appointing judges to the courts that will respect Roe v. Wade as a precedent.” He will also appoint people to the Department of Justice who will challenge states like Alabama, Missouri, Georgia, Texas and a number of states that “overstep their bounds under the Constitution.” Plus, he promises to lead an effort in Congress to turn the protection for abortion, encapsulated in Roe v. Wade, into a national law.

In other good news for young people, Julian Castro is determined to protect the 800,000 Dreamers who have received protections under the DACA program initiated by President Barack Obama. The program gives young people (average age 26) who entered the country as children, the right to legally work and go to school. Donald Trump has tried to end the successful program and his administration has argued in front of the Supreme Court that the program is illegal, leaving all the Dreamers as potential victims of deportation even though most have no memory of the countries they were born in.

“I’m going to make sure our Dreamers are protected” pledges Castro, who served in President Obama’s cabinet. “If the Supreme Court overturns DACA, then on January 21, 2021, I’ll get my administration to immediately work on crafting an executive order that will replace DACA in a constitutional way, so that we’re able to protect our Dreamers. They don’t have to worry about deportation and they can continue contributing wonderfully to American progress.”

Castro explains that his immigration plan will provide a pathway to citizenship for Dreamers, their parents and all undocumented immigrants, as long as they haven’t committed a serious crime. Julian vows to HollywoodLife that after separating children from their parents and putting them in cages–overcrowding migrants into cells so small they couldn’t sit down and not providing enough food or medical attention–his administration would take a 180 different approach from Trump’s. He says that his immigration plan “reflects common sense and compassion toward immigrants, instead of cruelty.”

“Number one, to overturn the Muslim ban which is egregious and unAmerican. Secondly, to end family separation and end the related Mexico policy (forcing migrants to remain in dangerous areas of Mexico while they await immigration hearings),” he promises.

“Third, to rejoin the Paris Climate Accord, so that we can lead again on sustainability and we can pursue a green deal in Congress to create jobs in the clean energy economy and protect our planet. Fourth, to restore protections for transgender folks in housing, in the military, in every way that we can. Then fifth, to enforce our anti-discrimination laws around the country. This administration has rolled back a number of anti-discrimination laws that are taking us backward. I want to take us forward.”

Forward–that has a nice sound to it, after the Trump years of rolling back environmental protections, student debt protections, worker protections and more. And Castro points to his years as a cabinet member as giving him the experience to move quickly to get “a ton of work” done. “I understand how to work that system,” he explains.

Castro’s twin brother, Joaquin Castro, is a member of the House of Representatives, serving on the Intelligence Committee, which has been involved in the Donald Trump impeachment inquiry, and Julian is quick to reply to the question about whether he supports Donald Trump’s potential impeachment.

“Absolutely. I called for his impeachment the day the Mueller Report was released. The evidence was clear and the evidence is even more clear after all of the testimony (in the impeachment inquiry) that Donald Trump violated his oath of office and abused his power,” he insists. “He committed bribery trying to get the President of Ukraine to open an investigation against a political opponent in order to get military aid.”

“Whether you’re a liberal or conservative, Republican or Democrat, what we don’t need is a dishonest, self-serving politician in the White House,” he asserts.

The Harvard-trained lawyer also pledges to make higher education accessible to American young people with “free public state universities and community colleges.” It’s not surprising that Secretary Castro is very committed to making education affordable–he has a very personal understanding of the critical importance of education. His father was a mathematics teacher and his wife is an elementary school teacher. As mayor of San Antonio, he introduced a pre-kindergarten program for 4 year olds. He is also a proud dad to 10 year old daughter Carina and 4 year old son, Cristian. His Instagram is filled with personal photos of the candidate playing soccer with his son, prepped to take his “zombie ballerina” daughter and “Johnny from Cobra Kai”son trick or treating with his wife Erica and wishing Carina love on National Daughter Day.

He admits that his toughest time in his quest to be the Democratic nominee for president, is “being away from my 10 year old Carina and my 4 year old Cristian.” He hopes his daughter is proud of him. She “has been to a couple of the debates and follows the campaign on TV. My hope is that she will also be inspired and see her father reaching for his dreams and that she’ll reach for her dreams, whatever those are.”

As of the date when this interview was posted, Secretary Castro, had not yet qualified to make it onto the December Democratic PBS debate stage on December 19. If you want to help Castro make it there, you can donate to his campaign at julianforthefuture.com. You can also find all his policy proposals for the environment, immigration, disarming hate, education and more there.