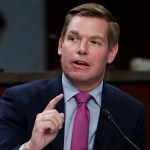 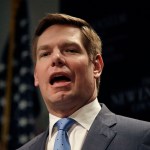 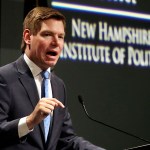 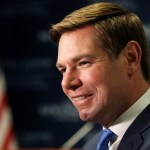 Did he who smelt it dealt it? The Twittersphere is debating if Congressman Eric Swalwell get out a giant fart on live TV after a loud, air-ripping noise could be heard during an interview on ‘Hardball’.

The biggest trending Twittertopic on Nov. 18 was literally over a possible televised on-air fart. During Chris Matthews‘ MSNBC show Hardball, he was talking to California Rep. Eric Swalwell, who was live on Capitol Hill to talk about the witnesses publicly testifying in the Donald Trump impeachment inquiry this week. While discussing the topic, a loud, air-ripping noise dropped and viewers were convinced Eric had just let out a massive fart live on air.

“Fartgate” soon became the number one trending Twitter topic with users dissecting every part of the audio and video. Some people slowed it down and claimed that Eric had a slow back and forth body movement between words when the alleged fart ripped, proving he did in fact pass gas on air. Some thought he let out a brief smirk of embarrassment. Others claimed it only sounded like a cellphone vibrating on a hard surface. Chris’ show Hardball later tweeted out the explanation, saying “Sorry to disappoint the conspiracy theorists – it was the #hardball mug scraping across the desk. Get yours today and let’s get back to the news!” with a link of where to purchase said mug.

Former 2020 presidential hopeful Eric reposted the Hardball tweet while writing “TOTAL EXONERATION.” Even current 2020 presidential candidate Andrew Yang tweeted his support of Eric, writing “I believe in Eric Swalwell” as to him not being an on-air farter.  Still, others weren’t convinced. One user named brown for whatever tweeted, “I’ve been a farter my entire life, and this is 100% ripping ass #fartgate.” User B. Hopt wrote, “#fartgate you can smell that fart through the phone. He definitely let one rip on live tv.”

no it’s a fart don’t ruin this https://t.co/8KGdXohGwl

Mostly the possible fart just brought people happiness and joy. User @Wahajahat tweeted, “I have seen the clip multiple times. I laugh out loud each time. It is just amazing. It’s the Moby Dick of farts. The King Kong. The Big Kahuna. It’s the Apex Predator of farts. If you think farts are beneath you, well, you are correct but you’re missing out on life.” Jimmy the Goat tweeted, “I, for one, think that the country desperately needed a good fart joke right about now. Thanks @hardball #fartgate #chrisdealtit.”