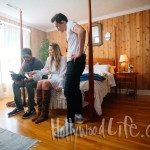 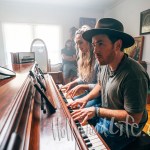 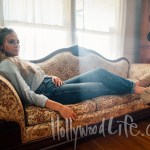 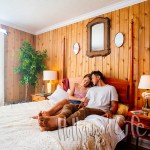 Did you just realize that Gone West is comprised of Grammy Award-winning singer Colbie Caillat, her fiancé Justin Young & their longtime collaborators and friends songwriters and Indie artists Jason Reeves and Nelly Joy? The group released their debut EP in January 2019 and have continued to crush it on country airwaves with their single “What Could’ve Been.” Gone West spoke to HollywoodLife.com in an EXCLUSIVE interview about their highly-anticipated album. “We went into this project with a vision of wanting the four-part harmony, acoustic, organic music, and the storytelling in our songs of either, what we’re going through as a band or what people around us are going through,” Colbie explained. “We actually have a lot of heartbreak songs on the record because we have a lot of friends that are experiencing it right now. But, there’s a lot of steel guitar and we also have one song that’s like a country reggae song. We have a pretty ballad, piano-driven ballad. There’s some fun uptempo songs that are like Fleetwood Mac-vibes — you have that cruisy feeling that you just want to put on in your car.”

Jason, who co-wrote many of Colbie Caillat’s biggest hits, including “Bubbly,” also revealed that their first single off the album “What Could’ve Been,” is a great taste of what is to come. “I think that song really shows our harmonies, especially in the chorus. But, it also just has a really universal, relatable message that we all connect to, about a relationship that may have turned out differently if we would’ve done small things differently throughout the process,” he said.

The two couples have worked together for years, making music “in different formations,” Colbie said. “Two years ago we thought, let’s see what it’s like to start a band together. All we really know is working together and writing together and recording together and touring together, that’s truly the foundation of how this whole friendship and work relationship formed.”

Justin continued that with the group, he was “excited to be in the room with so many good writers,” as he had almost exclusively written by himself and for himself during his career as an artist. “In a lot of ways, I feel like we compliment each other and we’ve brought out the best in each other in this collaboration.” Jason mimicked his sentiments, adding, “We’re all comfortable with each other but it’s different when all four of us write together because it’s just new. You have to learn how to do that, anytime you start working with somebody you have to learn each other and figure out how you’re going to create music together because there are really no rules and every song can come together in its own way.”

Be sure to watch the music video for Gone West’s “What Could’ve Been” and stay tuned for their upcoming album!