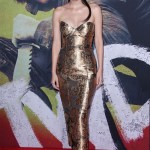 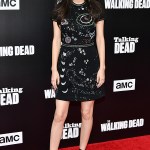 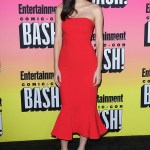 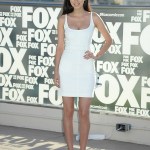 Christian Serratos, 29, is stepping into the shoes of one of the most iconic singers of the 20th century. The Twilight saga alum will play Selena Quinitanilla in the upcoming series for Netflix, Selena. In the first teaser trailer for the series — which will act as the show’s official “Part 1” — Christian’s face is barely seen, as she hums along while reading a script with Selena’s name in the text. Floating her red lacquered manicure over a record player, she puts on some music before dancing to and fro in her room. And the audience continues to follow Christian from there.

Next, audiences find themselves walking behind the singer, as she heads down the street in a purple jumpsuit. With a cut, we find Christian, her back still turned to the camera, heading into a studio. Once a microphone is front and center, Christian (as Selena) appears, a spotlight on the star, singing her heart out with animated gestures and abundant passion with every note she belts. “Alright, Christian,” a voice says off camera. “We’re ready to shoot.” With that, Christian gives the camera a knowing, confident smile as the title falls across the screen.

The series will undoubtedly chronicle the impressive and all too short career of Selena, a formidable voice in the world of Latin music whose legacy still lives on. Selena’s story has been brought to the screen before. Notably, Jennifer Lopez played the young songstress in the 1997 film, for which J. Lo was nominated for a Golden Globe. Perhaps the same luck could befall Christian!

The 29-year-old actress boasts quite an impressive filmography already. Christian appeared in the Twilight films as Angela. More recently, the actress has been a series regular on AMC’s The Walking Dead as Rosita Espinosa. Selena, however, marks Christian’s biggest starring role to date. The series hits Netflix in 2020, with a full-length trailer likely on the way in the coming months.