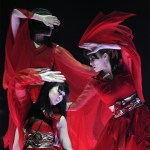 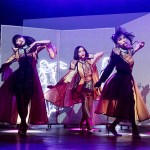 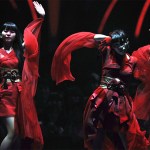 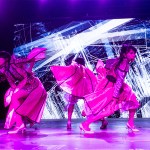 The best from Perfume is yet to come. The group talks with us their new no. 1 album, ‘Perfume The Best: P Cubed,’ how being the first J-Pop band at Coachella ‘changed’ their career and more!

Arguably the world’s biggest and longest-running J-Pop group, Perfume has seemingly done it all. The band – featuring a-chan, KASHIYUKA, and NOCCHi – has gone multi-platinum many times over, played sold-out shows in North America, collaborated with brands from UNIQLO to Apple, and, this year, made history by being the first J-POP group to perform at Coachella. This set, with Perfume’s signature dazzling stage show and enchanting pop songs, thrilled longtime fans while making new ones.

In the wake of this historic performance, Perfume gifted their fans Perfume The Best: P Cubed, a 52-track retrospective released to commemorate the 15th anniversary of their major debut. The ‘best of’ covers the group’s entire career while including two brand new songs. Clearly, fans were ready for more Perfume. Debuting at the top of the Billboard Japan Hot Albums charts, Perfume The Best: P Cubed marks the group’s eighth number-one album.

The group spoke with HollywoodLife over email about this brand new release. They talked about how performing at Coachella “gave us so much more confidence” afterward while revealing which songs on P Cubed they think deserve some more love.

HollywoodLife: In addition to fifty of your classic songs, Perfume The Best: “P Cubed” includes two new tracks – “Challenger” and “Nananananairo.” What can you tell us about these new songs?

a-chan: “Challenger” is one of the first songs that connected Yasutaka Nakata and Perfume like 16 years ago, and it’s been re-arranged, and the lyrics are re-written for this album.

NOCCHi: When Nakata said he would make some original songs for the best-of album, I really wanted to perform his latest songs. Then I heard that it would be “Challenger.” I was confused…why would we sing this older song? It brought to mind the older music that Nakata used to make for us. But then we heard why Nakata picked this song, and we understood the meaning of this choice. “Challenger” is part of Perfume’s history, but also our shared history. We thought, ‘wow Nakata is so passionate.’ We want to match his passion, too.

KASHIYUKA: When I first heard “Nananananairo,” I thought it might be too cute, but the way music matched the facemask commercial shot in Taiwan, I loved it. Also, the full version sounds so different from just listening to part of it on the ad.

a-chan: This is a great song to listen to when you’re taking a trip somewhere.

The greatest-hits album also contains live footage from your Coachella set. First off, congratulations on being the first-ever J-Pop group to perform there. Secondly, how was it like to play for that crowd? I imagine performing at a festival like that was different than usual.

KASHIYUKA: It gave us so much more confidence after performing for that crowd. At backstage, people were very friendly. Even if they don’t know the name of the artist, they say “hi” to them and say, “Hey, let’s get a selfie.” We went to various parties outside of the festival, and we talked about future plans with a lot of people. They even mentioned possibly collaborating if the vibe was right. I got the sense foreign artists were very passionate, and I was surprised how casually they talked about work like that.

a-chan: Also, everyone there seemed like they were practically naked [laughs]. I was surprised! Other festivals we’ve been to, especially the ones in Japan, people who go to those gatherings are dressed like they are going to the mountains. It’s all very oriented towards camping. At Coachella, though, all the people were quite different. They were enjoying the music of course, but also just enjoying being there…and being themselves. They were all very fashionable and cool. Though yeah, I was mostly surprised by how they seemed almost naked. It looked like they were wearing swimsuits.

Are there any other American festivals or events that you would like to play next?

Perfume: What do you recommend? We want to know.

KASHIYUKA: We want to go to more festivals all over the world. People message us from lots of countries and cities, so we’d love to go to Europe, Australia, wherever really. So far, we’ve only played festivals in the United States and Asia. We want to meet even more of our fans in the future.

Your set at Coachella was visually stunning – both with the digital projection and your fashionable outfits. Is it fun to create such a multimedia experience?

KASHIYUKA: Yes, it is. We create our production with Rhyzomatiks, tech team lead by Daito Manabe, and MIKIKO, our choreographer and stage director. Using technology, we actually try to create something that’s warm and has a human touch. That’s always our motto.

NOCCHi: Our stylists and we all want to try something new with fashion and create clothes you’ve never seen before!

Were you surprised by people’s reactions to Coachella? I imagine some concertgoers had no idea what was going on (but left the set as new fans of PERFUME.)

a-chan: The way people look at us changed. People we have never crossed with before — IT workers, newspaper journalists, CEOs. We used to just have fun performing live, but now it feels like we are being tested. There are much higher expectations now. I don’t think we have changed because of Coachella, but I do think other people see us in a different light now. I feel like we need to match those expectations. Of course, we are still having fun, and it is enjoyable to match those expectations.

Over the past couple of years, pop groups from Asia are finding new levels of mainstream success in America. As a band that has played sold-out shows across the USA for years, do you see yourself as trailblazers for these new acts?

KASHIYUKA: I’m not sure because I thought that more artists were known through the Japanese “Kawaii” culture in the West.

a-chan: It’s hard to believe so, but if we can, we should do more! There are more artists here who want their music to be heard outside of Japan, and there seem to be more audiences abroad who are open to our music.

“Best Of” albums also allow artists to give some love to songs that may have gone unnoticed the first time around. Are there any songs on “P Cubed” that you hope get some extra attention? Or, are there any tracks that hold a special place in each of your respective hearts?

KASHIYUKA: “My Color.” This song is special for me because the message is, you can do anything you want with your hands…but you also need to connect with other people’s hands in order to live. Before our foreign concerts, we were worried about the language barrier. But during the concert, we did this song last, and we put our hands up…and the audience did the same. I thought we got over that barrier and became one with the audience.

NOCCHi: “Polyrhythm.” That song was the first song that got lots of attention from people…it was our first number to be featured in a TV commercial, it was played a lot on music TV shows. It was featured in Cars 2, and even played when we walked the red carpet in Hollywood. That’s the most important song to me.

Perfume The Best: P Cubed is out now.