In another time, in another place, he was Jamie Sierota, the lead songwriter of the band Echosmith, performing alongside the rest of his siblings. Since leaving the group in 2016, Jamie has branched out as a songwriter, penning music for Adam Lambert, Quinn XCII, Bay Ledges, and Your Smith, Jamie has returned to performing. He has brand new music and a brand new name: Meija. With his debut EP, So Long, Kid, Meija displays his deft songwriting skills. “Kid,” the opening track, is an electro-jam that will require eviction before its chorus – “I’m a kid /oh my god / I’m in over my head “ – leaves your ear.

With the previously released “Buttons” (a synth-pop bop that makes use of some unconventional instruments), “Laugh It Off” (a political anthem for the Twitterverse), and “I Already Said That I Love You,” So Long, Kid also sees Meija reimagines Prince’s “I Would Die 4 U” without the frenetic rhythm of the original. Instead, it’s a quiet, reverberating, almost haunting ode powered by Meija’s vocals and intriguing production. So Long, Kid proves why Meija will be one to watch in the next decade.

He spoke EXCLUSIVELY with HollywoodLife through email, talking about the new EP, the origin of his name, the politics behind “Laugh It Off,” and what drew him to that Prince song above others.

HollywoodLife: This new solo project is called Meija, an anagram of your original name. What’s the difference between Meija and Jamie? Two sides to the same coin?

Meija: I decided to go with the name Meija because the project felt so close. I had been working on a lot of other people’s projects over the past few years and finally decided to work on a project that was just me. I felt like using an anagram of my name was the best way of representing that.

There are a lot of unexpected sounds on this EP. Toy pianos. Glass Bottles. Are you having fun with the metaphorical musical sandbox of this project?

Related: Olivia Cooke: 5 Things About The Actress Playing Adult Alicent In ‘House Of The Dragon’

Yeah, I love experimenting with different sounds and am also a big thrifter. I’m always stopping by my local Goodwill to see what I could find. A lot of the instruments used on EP were found in thrift shops or sidewalk sales. I inevitably get bored with modern instruments and samples, and I find that using a little piano/toy or even something from the recycle bin inspires me to shake it up.

“Laugh It Off” was written during the 2016 political election, and with its lyrics, I can see how the attitude at the time inspired the sound. Have any more political situations sparked your creativity? Or have you found inspiration elsewhere?

I’m a bit of politics nerd. I love listening to podcasts and trying to understand how people work and think, even when I disagree with them strongly. It informs my writing along with things like love, growing up, etc. The whole EP is focused around the realization that youth and innocence can’t last forever, at least not in the way it did as a kid. I’m always having to confront new realities, and politics is a huge part of that. 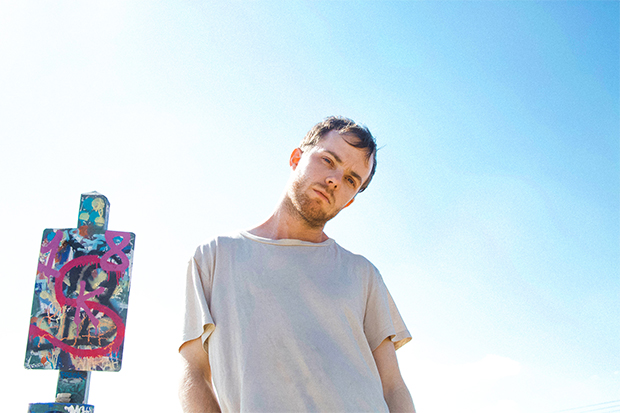 Is there a story behind the title, “I Already Said That I Love You”? That’s such a powerful albeit loaded line.

I tend to talk too much when I’m in conflict with someone. Especially in a romantic relationship. I’ll just say “I love you” or “I’m sorry” almost as a knee-jerk reaction sometimes. Words lose their meaning when you overuse them, and I’m definitely guilty of that. Saying “I love you” could sometimes be said in place of actually showing it.

You cover Prince (“I Will Die 4 U”) on your new EP. Did you have any interaction with him before his untimely passing?

I never had any personal interaction with him, but have always been a fan. He has such a strong and independent spirit as an artist that I find really inspiring.

With Prince’s discography, what drew you to “I Will Die 4 U”?

It’s definitely my favorite song of his. I just love the melodies. It’s a really beautiful song and thought it’d be cool to really strip it back and just showcase that instead of trying to replicate what he already did.

You’ve worked with Adam Lambert, Quinn XCII, Your Smith, and — of course – Echosmith. As Meija, are you open to collaborations in the future? Or, is it too soon in Meija’s existence for that?

Definitely! That’s what I love about producing or writing for other artists, the collaboration. There’s some stuff in the works already that I’m excited about and am always looking to try new things. I love it when two different artists come together on a song and hope to do some of that with Meija.

Are you planning a full length soon? What’s next for Meija?

I’m already working on the next project, not sure if that’ll be a full length or another EP yet. I have plans to put out a lot more music next year, and I’m currently in the process of figuring out how best to do that!

So Long Kid is out now.